Why Does The U.S. Produce So Much Waste? 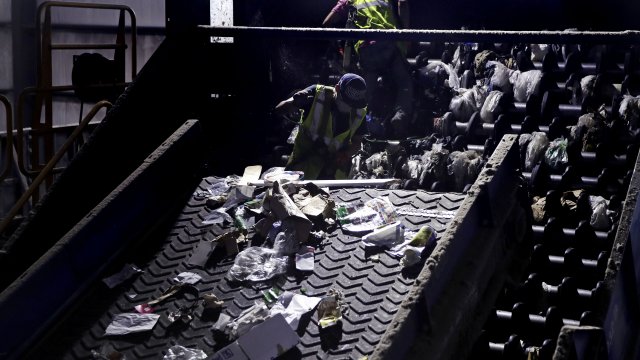 When you throw your trash out, do you know where it goes? The hope is it’s recycled. But the reality is not every piece thrown in the bins actually gets recycled.

From grocery bags, to straws, and disposable utensils, plastics are an everyday staple in our culture.

According to the Environmental Protection Agency, the U.S. produced about 36 million tons of plastic waste in 2018.  The EPA says only 3 million of that was recycled, while nearly 27 million tons were sent to a landfill.

Plastic makes up only a small portion of waste generated in the U.S.

The nation produces more than 12% of the planet’s trash. Yet it is home to only 4% of the world’s population. And each year, the amount generated here keeps piling up.

The EPA found the country was responsible for over 290 million tons of waste in 2018.

That comes down to every American generating an average of nearly five pounds of waste, each day. Paper and cardboard were the items thrown out the most – followed by food.

All the excessive waste production begins when you first gather your trash.

There is no nationwide standard for which items are recyclable. States and cities are left to make their own rules. In Chicago, glass is allowed to be recycled. In Fairfax County, Virginia, it’s not.

Materials become contaminated when items go in the incorrect bin, like when a dirty food container ends up in a recycling bin.

Facilities are then unable to process the waste.

Some items simply can’t be recycled. Think of plastic bags, straws, and eating utensils. When disposed of improperly, their polypropylene can be toxic and harmful to the environment, and when dumped in landfills, can take around 20-30 years to completely decompose.

Most of these items are too small for conveyor belts, and can go undetected in the sorting process.

EPA numbers showed in 2018, just under a quarter of the millions of tons of trash in the U.S. Was recycled. Most waste was sent to landfills.

For decades, China brought in most of the world’s waste. That was until 2018.  China’s “national sword policy” banned the import of most plastics. Beijing’s intention was to improve environmental conditions and cut the flow of illegal goods into the country.

This caused American companies to shift and send plastic scrap waste to smaller, developing nations like Indonesia and Malaysia. Other nations then began to change their own standards.

Recycling costs shot up in the U.S., as existing infrastructure struggled to handle the influx.

Before 2018, recycling companies were paid to sell off recyclable materials. Then, they were paying to have it taken away. The cost shifted down to cities, who had to pay more to get rid of the waste.

The city of Bakersfield, California used to earn about $65 a ton from its recyclables. The impacts of china’s new policy forced them to pay $25 a ton to get rid of them. In 2017, Stamford, Connecticut made $95 thousand dollars by recycling its waste. The next year it paid $700,000 to have it removed.

Some cities that couldn’t afford the increased cost, shut down their recyclable programs.

America recycled less than 7 percent of items in 1960. Though recycling levels have increased, that rate is now around 32 percent. More counties and states are enforcing their own recycling practices.

Yet advocates and conservationists say there is more work to be done on the federal level. Especially with food.

The EPA says much of our food supply is never eaten. Most of it ends up in a landfill or incinerated.

In 2015, the Department of Agriculture and EPA announced a new domestic goal to reduce food loss and waste in half by 2030.

Advocates say change can begin now, with a call for Americans to utilize reusable items and reduce waste.

How Social Media Has Fueled The 'Clean Eating' Movement

The CDC Is Restructuring Its Agency Amid Public Criticism

Rescue Me: Pets, Adoption And The Challenges Shelters Face