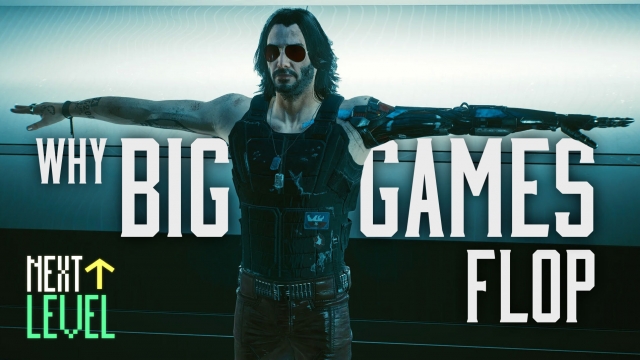 SMS
The Big Problems Behind Big-Budget Video Game Flops
By Matt Picht
By Matt Picht
March 11, 2021
The production process for big-budget video games leads many major studios to overpromise and underdeliver on the games they make.
SHOW TRANSCRIPT

Imagine if a TV show accidentally left a blooper in an episode, or if a Marvel movie forgot to take out the green screen in one of their scenes. Those kinds of screw-ups are pretty rare in big-budget entertainment … except in video games.

From Cyberpunk 2077 to Fallout 76 to No Man’s Sky — gaming's history is littered with high-profile titles that flopped on release, burning their hundreds of thousands of day-one customers. To understand why so many games come out buggy, broken, or unfinished, we need to take a look at the industry that produces them — why it builds such lofty expectations, and how things can end up going off the rails.

Video games come in all sizes, but the massive blockbuster games we're talking about usually fall under the designation of triple-A development. These are the most expensive, most stunning games the industry can make — all of which requires a ton of effort.

Renee Gittins is the executive director of the International Game Developers Association, a nonprofit that advocates for game developers around the world.

She told Newsy: "Sometimes people say, 'Oh, you know, it's easy. You just drag and drop things into a scene. And then it's all magical.' When there's really so much more that goes into it."

"Every single button click is designed, each instance of those interactions have sound effects and art and animations and planning and code behind it. So games themselves are very, very expansive."

Making a triple-A game often means pushing gaming technology to its limits, with expansive virtual worlds, stunning visual fidelity, and complex artificial intelligence systems, all while allowing an unpredictable player to bounce around like a chaos gremlin. It can take years of work and many millions of dollars.

That kind of investment makes a strong marketing push a must, helping ensure game makers recover those heavy costs. But games run into trouble when the marketing promises a game that the development can't deliver.

Sky-high expectations can sink a game's launch easily: 2016 release No Man's Sky was a fine  game in its own right, but fell flat at launch because it couldn't live up to the wildly ambitious expectations generated by fans and the game's marketing.

Still, that doesn't account for games like Cyberpunk, which ship with glitches and bugs galore. Those kinds of problems are unique from game to game: but they do have a common root cause in a game's production process.

Amanda Cote at the University of Oregon recently published a paper studying crunch: a semi-mandatory period of grueling overtime game developers go through to finish a game before its release.

Game production can be unpredictable, and developers often end up crunching for months to catch up on deadlines or fix unexpected problems. Worse, some studios rely on crunch to make up for planning or budgeting shortfalls elsewhere in the project.

"It's easy to understand why people feel like they have to rely on tactics like crunch, why they have to finish and release a game no matter what. But doing so before a game is ready can sink an otherwise potentially excellent product," Cote said.

Crunch culture has deep roots in the industry, including at award-winning studios like Naughty Dog and Rockstar. But the practice has a lot of downsides, burning out developers and leading to mistakes.

Cote told Newsy: "There's a lot of research on how overwork makes it impossible for you to catch small things like bugs, or how at a certain point of overtime, you actually start introducing more problems than you're solving. So crunch can lead to these really buggy, disappointing games."

Right now, there's not much incentive to change the way games are made: half-baked or not, blockbuster titles usually still bring in massive sales. And post-launch work can give games new life beyond their ship date — several games judged dead-on-arrival at release have made astonishing comebacks.

But as triple-A games grow bigger, the game production process is coming under scrutiny. And every big-budget flop shines a spotlight on the way games are made — and what might need to change.

There's A Rise In Catalytic Converter Thefts Across The U.S.

Artificial Intelligence Is Now Used To Track Down Hate Speech

Pres. Biden Signs $280B CHIPS Act In Bid To Boost U.S. Over China

Musk Says Twitter Deal Could Move Ahead With 'Bot' Info