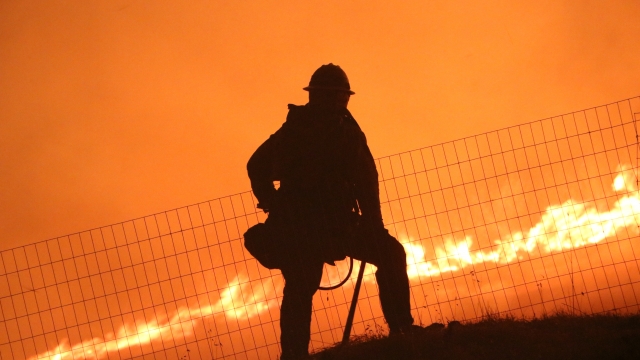 By Meg Hilling
May 10, 2021
Amid dry conditions and early blazes, western states are bracing for wildfire season.
SHOW TRANSCRIPT

"Our summers are getting longer and hotter. Our fire seasons are starting earlier and we have that potential to basically repeat what we saw last year," Captain Jon Heggie with CAL FIRE said.

Across the American West, fire experts are bracing for what looks to be another summer of potentially devastating wildfires as the season gets underway alarmingly early.

"What we're seeing this year is really an increase of fire activity, what we saw compared to last year," Heggie said.

In California, New Mexico and Arizona, flames are already roaring to life.

"The changing environment, the changing seasons and the lack of moisture and precipitation we get in the wintertime is really extending those fire seasons and really kind of creating that year- round fire season," Heggie said.

Exceptionally dry vegetation has essentially turned states like California into a tinderbox. As a result, fire agencies like CAL FIRE say they're having to adjust their approach.

"We brought in extra staffing earlier in the year than we do typically," Heggie said. "Every acre in California will burn eventually, you know, at some point in history, it will burn. We need to be prepared right now that it's going to burn in the near future."

As crews gear up to battle any wildland blaze in the months ahead, the public is being asked to take preventative action by clearing any potential fire fuel, like old leaves or dead plants, away from homes. They're also being asked to take any evacuation order seriously and to not attempt to return to their property before fire authorities say it’s OK.

"If you put yourself in a situation where we're at risk, where we're saving you instead of stopping that fire, that means that there's going to be other people that are going to become at risk because we didn't stop the fire where it could have," Vestal said.

As fire crews put in the work on the ground, the U.S. government is taking stock of the damage brought on by extreme weather conditions.

"The U.S. Department of Defense has been impacted directly in just the past few years by extreme weather caused by climate change," Lloyd Austin, Secretary of Defense said. "The wildfires in California have threatened other military installations, forcing repeated evacuations."

Some high-risk states are examining their budgets to find funding that could help prevent or suppress wildfires. In April, California authorized $536 million in preparation for the upcoming months.

"This early action brings over half the money that we had proposed to be set aside for wildfire preparedness and preparation and some suppression dollars and it brings it now into the present," Governor Gavin Newsom of California said.

"We're a very small group of scientists that are trying to tackle one of the biggest problems in the U.S. right now in terms of climate change impacts on how society is going to manage landscapes," Craig Clements, director of the Wildfire Interdisciplinary Research Center said.

"If you think about other phenomena in terms of weather, hurricanes, tornadoes, flooding, there are entire centers set up that are federally funded,"Clements said. "We need federal funding to really drive fire science forward."