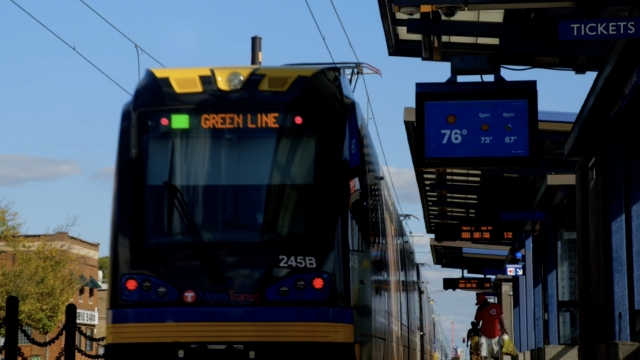 The infrastructure package that just passed Congress would bring more than $1T in new projects across America, including roads, bridges, and numerous other efforts that will change the face of the U.S.

So often in the past, projects like these haven't included the voices of communities most affected, but one train line in the Twin Cities, where communities whose voices hadn't been heard historically, wanted to make a big difference.

In a certain light, the straight line in St. Paul projects majesty and hope, but the light of the line itself required a fight that goes on.

"The Green Line is just a place of dreams, of possibilities," Heu said. "I never imagined in my life that we would actually have a shop on University Avenue."

A half block away, Quynh McDermott runs a beauty salon in an area called Little Mekong, where she says residents shop for Asian food. It resembles the same neighborhood from their childhood, except now it has a light rail down the middle.

"We actually have a lot of customers that use the Green Line to come visit us," Heu said.

The Green Line is the eleven-mile stretch of light rail that connects Minneapolis and St. Paul. It runs along University Avenue, right through communities who almost saw it pass right by.

Modern American history is riddled with highways constructed right through the heart of communities of color. Two blocks south of University, the I-94 freeway ripped apart the thriving Black community of Rondo. With the Green Line, the concern was different. Activists said it didn't include enough stops through the communities where it ran: communities that could use the connection.

Coalitions of campaigns led to governmental change. When the Green Line opened, it included three new stops at neighborhoods in need.

"With the Green Line, it's brought so many young people actually into the space," Heu said.

"They don't have to park," McDermott said. "A lot of them don't have cars. They're college students. One of my clients that lives in downtown St. Paul... said that she never would have noticed my salon if she was driving."

But success is not static. More foot traffic and more eyeballs have meant more new development and rising rents.

"There's new developments of apartments and luxury apartments coming up on University Avenue along the Green Line," Heu said. "It feels a bit bizarre – bizarre because, like, you just never would have expected that to happen."

"Gentrification is imminent, and if the building is not owned by the community, if business doesn't afford to rent it, that will happen," Gelgelu said.

"It's a constant battle between community developers who are trying to stop gentrification and people who want to continue to develop because they believe that Frogtown and the Green Line is a worthy area to invest in," Heu said. "Change is happening. It's inevitable."

For so many, the Green Line means success.

Communities spoke out, and leaders actually listened. Now Little Africa and Little Mekong are known neighborhoods in the Twin Cities, but the fight for the light shining there now is evolving, along with the straight-line train line it shines upon.

"A lot of people that live here have grown up here for the longest time," Heu said. "It means a lot to me that we continue to honor the people who have been here, the stories that have come, but of course, always be open to grow and change as a part of life."