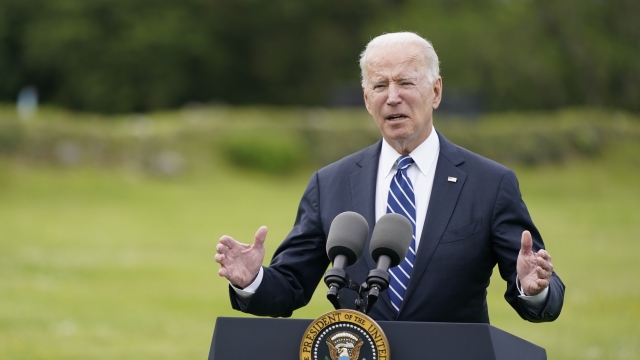 SMS
How The U.S.' 500B Donated Vaccine Doses Will Impact The Globe

President Biden's announcement the U.S. will donate half a billion doses of the Pfizer COVID-19 vaccine around the globe is the largest any single country has made so far.

"Even though 250 million is still only a small portion of the entire population that needs to be vaccinated in those countries, it will go a long way to vaccinate people above 65 years of age, as well as the front line workers like health care workers," said Richard Reithinger, vice president of global heath at RTI International.

It also further establishes the U.S. as a world leader in vaccine distribution at a time when some public health experts have called on wealthy nations to do more to help those outside their borders.

The White House says the doses, which will be produced in the U.S., will begin shipping in August. The first 200 million will be delivered by the end of this year. The remaining 300 million will go out in the first half of 2022.

Pfizer's vaccine is a two-dose regimen that has to be kept cold during every stage of transportation. Once it's removed from ultra cold storage, the doses only last about five days. That could present some logistical challenges, and possibly determine where the vials are sent.

"Larger urban centers should be also prioritized, where, of course, you are more likely to find the type of infrastructure that you need to distribute the vaccine," Reithinger said.

Senior administration officials say the total cost is still being determined, but they expect to spend at least $1.5 billion on from the American Rescue Plan.

Still, some say the U.S. and other nations need to do more to vaccinate the world. Democratic congressman Raja Krishnamoorthi praised the announcement in a statement, but added, "This must be only the first step in a larger effort to expand and accelerate the production and delivery of the billions of doses we need to end the pandemic."

"We're doing this to save lives, to end this pandemic. That's it. Period," President Biden said Thursday.