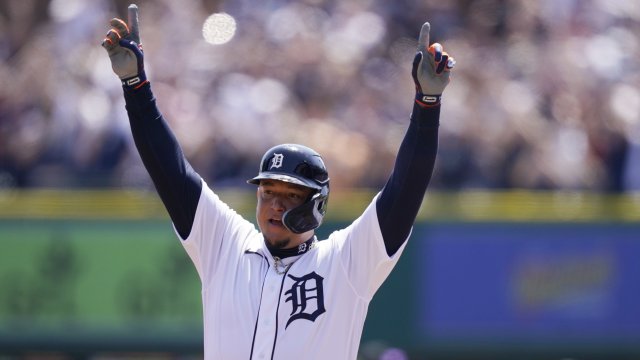 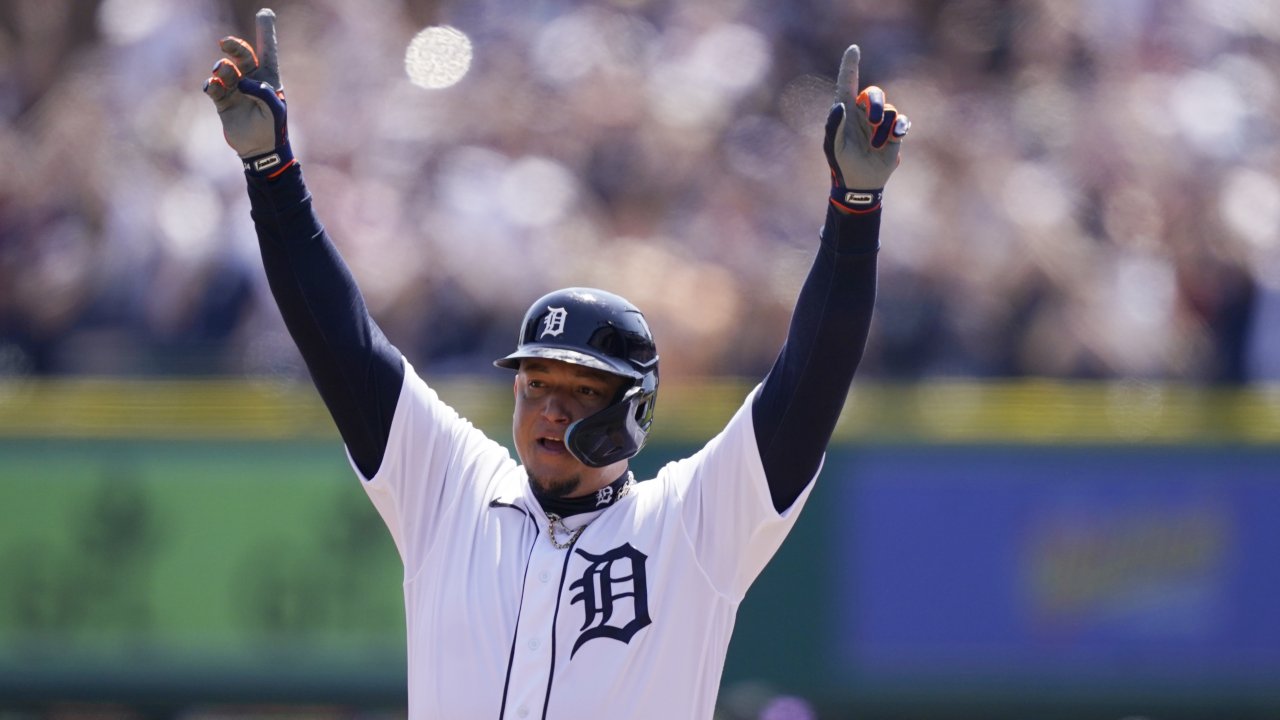 Tigers star Miguel Cabrera delivered the 3,000th hit of his decorated career Saturday, becoming the 33rd major leaguer to reach the mark and the first player from Venezuela to accomplish the feat.

Still an imposing presence at 39, Cabrera made history by grounding an opposite-field single to right through the shift in the first inning of Detroit's game against Colorado.

Cabrera immediately raised his right arm as he headed toward first base. The crowd of 37,566 at Comerica Park gave him a rousing ovation and chanted “Miggy! Miggy!” while fireworks were shot off from beyond the center field fence.

The milestone hit came on a 1-1 pitch from Antonio Senzatela, a fellow Venezuelan, in the first game of a day-night doubleheader. Rockies shortstop José Iglesias, who played with Cabrera on the Tigers, came over to give his former teammate a big hug.

By then, all the Tigers were streaming from the dugout to greet the newest member of baseball's elite 3,000-hit club. Moments later, Cabrera went behind home plate to embrace his mother, wife, son and daughter on the field.

“I’m happy I hit it here. I’m happy for the people of Detroit to see it. Hopefully I can get more hits here,” Cabrera said.

Cabrera soon returned to first base, but he didn't stay there for long. He scored on a three-run homer by 22-year-old rookie Spencer Torkelson, who is touted as the next big thing in Detroit and has taken over as the Tigers' regular first baseman with Cabrera now in the role of designated hitter.

When the inning ended, the scoreboard flashed “Congratulations Miggy." Cabrera emerged from the dugout for a curtain call, waving to fans who had been rewarded with the highlight they came to see.

Cabrera, however, wasn't quite done. He added a two-run single in the sixth, exited for a pinch-runner and drew another huge cheer. The Tigers went on to win 13-0.

Cabrera kept moving up the chart with a bloop single in the first inning of the nightcap, which the Rockies won 3-2. He finished the day with 3,002 career hits.

A two-time AL MVP, a Triple Crown winner and an 11-time All-Star with four batting titles, Miggy's place among the Major League Baseball greats already was assured long before this afternoon in Detroit.

As a 20-year-old rookie, Cabrera helped the Florida Marlins win the 2003 World Series championship. All these years later, stamping his name onto the 3,000-hit list had a nice ring, too.

And it'll certainly look good on a plaque in Cooperstown someday.

Last August in Toronto, Cabrera connected for his 500th homer. He’s at 502 in his 20th season.

Cabrera is the seventh Latino player to make the 3,000 chart. Hitting the mark tied him with the late Roberto Clemente, and hit No. 3,001 moved Cabrera ahead of the Pirates Hall of Famer.

Robinson Canó trailed Cabrera on the active list with 2,630 going into Saturday and is 39 years old. Yadier Molina, also 39, followed at 2,116.

Cabrera got three hits Wednesday to get to 2,999, then struck out in his final at-bat of the night. He went 0 for 3 Thursday and was intentionally walked his final time up against the Yankees, drawing loud boos and chants from Detroit fans.

The hallowed hit remained on deck when Friday night’s game against Colorado was rained out.

Cabrera was the third player to get his 3,000th hit while with Detroit, joining late Hall of Famers Ty Cobb and Al Kaline.

“Al is one of my heroes. It’s really sad he couldn’t see it because he would always talk about this moment. Hopefully, somewhere right now he’s happy and smiling,” Cabrera said.

While age has diminished his power to clear any fence and smash opposite-field shots to right-center, Cabrera has enjoyed a monster career at the plate.

Cabrera became the first major leaguer in 45 years to win the Triple Crown by leading the league in batting average, home runs and RBIs in 2012. That year, he won his first of two straight MVP awards and helped Detroit reach the World Series, during a stretch that included four straight division championships.

“He is one of the great right-handed hitters ever,” Yankees manager and former Marlins teammate Aaron Boone said this week.

“And 3,000 hits, 500 homers, that’s obviously rarefied air. He’s done it, you know, in bigger ballparks his entire career, between Florida and here also. You know, he’s an all-timer. He’s in that, probably inner circle, of even the Hall of Fame. It’s been a special career,” Boone said.

Detroit acquired Cabrera in a trade with the Marlins in 2007, with Dontrelle Willis also going to the Tigers in a deal for Andrew Miller and Cameron Maybin. Cabrera had 842 hits at the time.

The swap came a year after the Tigers lost the World Series to St. Louis, in the hope that Cabrera would help them win the championship for the first time since 1984.

The Tigers, though, never won it all with their superstar. Detroit was swept by San Francisco in the 2012 World Series and spent a decade in a rebuilding mode that bottomed out with 310 losses between 2017-19.

After Cabrera was an All-Star for the 11th time in 2016, his production declined and Detroit’s rate of success did as well.

The Tigers made bold moves in the offseason in a quest to be relevant with Cabrera serving as a draw to bring fans to the ballpark and to hit about one ball per game into the outfield grass with savvy swings after crushing baseballs with incredible force earlier in his career.

A top prospect in the minors, Cabrera made his big league debut in June 2003. He announced his presence to the whole baseball world that October.

Brushed back by a couple of heaters from Yankee ace Roger Clemens, Cabrera came back to launch a home run off the Rocket in helping the Marlins win the World Series.

Cabrera is almost twice as old now and is still a kid at heart, recently taking the grounds crew’s three-wheel bicycle for a ride during batting practice.

And, one of the game’s all-time greats can still get a base hit against some of the world’s best pitchers.

Serena Williams Loses At Wimbledon In 1st Match In A Year

How College Athletes' Name, Image And Likeness Changed The Game

How Soccer And Formula One Are Winning Over American Fans