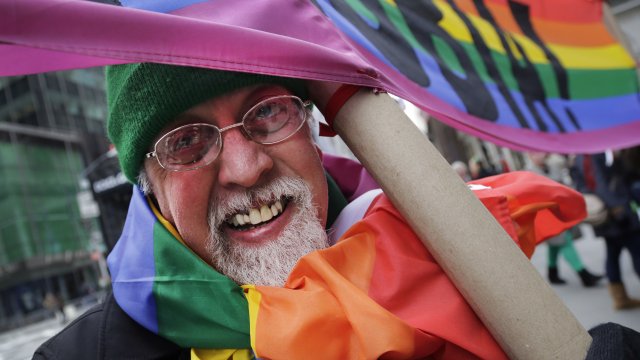 SMS
How The Rainbow Flag Became The Symbol Of Pride
By Casey Mendoza
By Casey Mendoza
June 14, 2021
The rainbow pride flag wasn't always so ubiquitous. Its history starts in the 1970s with artist and activist Gilbert Baker.
SHOW TRANSCRIPT

You already know what this flag stands for. It's one of the most recognizable symbols in the world, on par with the American flag or the recycling symbol, and especially during Pride Month, it's everywhere.

Charley Beal, president of the Gilbert Baker Foundation: "It is unsurpassed as a global icon in terms of something that stands for hope and diversity, as opposed to a product being sold or a country. It is a global symbol."

But this flag wasn't always so ubiquitous, and its predecessors included a lavender rhinoceros, the Greek letter lambda and the pink triangle — all of which have their own separate meanings and histories, but weren't accepted by the LGBTQ community at large.

So, how did we get here with the rainbow pride flag? Its history starts in the 1970s with artist and activist Gilbert Baker.

Beal: "Gilbert had become fascinated with flags in 1976, during the Bicentennial. He just suddenly thought, 'These things are powerful.' He saw armies marching into war under a flag and he thought: 'We don't just need a new symbol. We need a flag.'"

The very first rainbow pride flag was designed and hand made by Baker and a group of volunteers for the 1978 San Francisco Gay Freedom Day Parade. Originally eight colors , the flag's stripes stood for sex, life, healing, sunlight, nature, magic, serenity and spirit.

After the parade — and months later, after the assassination of San Francisco politician and gay icon Harvey Milk — demand for the rainbow flag skyrocketed.

James Ferrigan, vexillologist and former colleague of Gilbert Baker: "My little story in Polk Street was kind of the epicenter. Gilbert worked there, and I had access to some of the largest flag companies in the world."

It was at the San Francisco-based Paramount Flag Company, where Baker worked with flag scholar James Ferrigan, that the rainbow pride symbol spread beyond the city — not just as a specialty item, but something that could be as readily available as the Stars and Stripes.

Ferrigan: "It was astonishing to me how quickly the rainbow, which truly was a flag of pride and not politics, eclipsed all the others."

Ferrigan: "There were some hurdles. And some of the flag companies we approached said, 'Jim, do you know what that flag is?' I go, 'Yeah, I'm keenly aware of what that flag is. I need as many of them as I can get.' And then they go, 'Well, we'll make it, but we won't put our label on it.'"

Those hurdles didn't stop the rainbow flag from being displayed across the country by allies, activists and even some government buildings. Baker even worked with the ACLU to make sure anyone could freely use it.

In recent years, it's also become a seasonal symbol used by brands and corporations to use during pride month — with activists being watchful and vocal about whether those efforts are genuine.

Beal: "It's something we’re very passionate about. If you’re not going to live up to the principles sewn into that flag, then don’t use it. And if you’re just trying to sell mugs and T-shirts, we can’t stop you. But we will call you out."

Today, the rainbow pride flag has also become a "mother of flags" for others within the LGBTQ community — like the pink, lavender and blue bisexual flag created by Michael Page in 1998, or the blue, pink and white transgender flag created by Monica Helms in 1999.

Beal: "You should fly the flag that speaks to your soul."

Even after Baker's death in 2017, his rainbow flag has continued to live on and evolve through redesigns from artists like Daniel Quasar and Amber Hikes. With black and brown stripes, and the stripes of the transgender flag, the redesigns add visibility to the fact that the pride movement was led by transgender people of color — a group that is still one of the most disenfranchised and marginalized groups in society.

Beal: "It's a brave thing to do, to create an image and an icon — and we totally encourage people to do it. And we're really proud that people would see the rainbow flag as inspiration for a new flag."