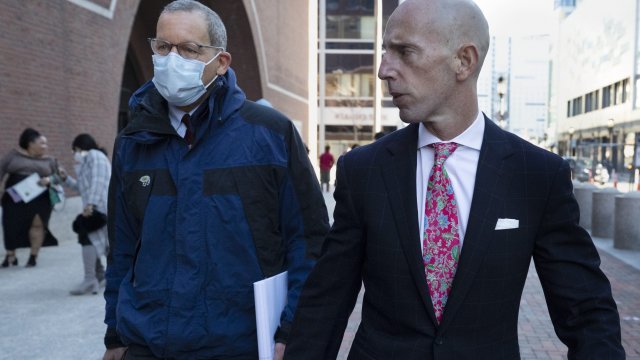 SMS
China Initiative: Effect Of Espionage Mission's Drift From Focus
By Newsy Staff
By Newsy Staff
January 5, 2022
The DOJ launched the program to "identify secret theft cases," but it hasn't been very successful.

A recent story involving the curious case of professor Charles Lieber, the chair of the chemistry department at Harvard University, has floated under many people's radars recently.

On the surface, it's just a matter of tax fraud: Just before Christmas, Lieber was convicted of six charges relating to false statements, wire fraud and hiding financial support from a Chinese University. But this case is about so much more than tax fraud — it's about espionage, academic freedom and the escalating research wars between China and the U.S.

The Lieber case was the first guilty verdict as a result of a Department of Justice program known as "The China Initiative." In 2018, the DOJ launched the program to "identify secret theft cases" and enforcement over "non-traditional collectors" of information, like researchers in labs and universities.

The program was inspired in part by a rising number of cases alleging economic espionage in the tech and science industries in the U.S. The cases range from indictments against whole companies, like Huawei allegedly stealing tech from T-Mobile, to individuals, like an Apple engineer who was stopped by the FBI before flying back to China after allegedly stealing secret information. "So you have to understand the China initiative within the broader context of both the real threat of Chinese economic espionage, of hacking; when the China Initiative launched, there was all of this language about countering economic espionage," said Eileen Guo, senior reporter for MIT Technology Review.

"But when you actually look at the data, what we found is that economic espionage was not really the focus of the initiative and that as time went on, it became less of a focus," Guo said. "So of the 77 cases, 25% include alleged violations of the Economic Espionage Act and a growing number, actually, 30% had to do with what we are calling research integrity."

Violating "research integrity" here means cases of academic researchers or students not disclosing their affiliations or funding from Chinese entities. In many cases, the researchers and students claim they didn't even know they were violating any rules.

Many of these cases hinge on funding disclosure rules at universities, which can already be vague or contradictory. Like last year, the first China Initiative case to go to trial over research integrity was for professor Anming Hu at the University of Tennessee. He actually followed the university guidelines given to him for disclosures but was charged with violating federal law.

"This was really was an example of one of the key concerns that they had of the China Initiative from the beginning, which is that when you start out investigating people because of their so-called nexus to China ... as opposed to starting out with the evidence, then you're going to find some reason to say that someone is guilty of some crime, and his trial over the summer resulted in at first a mistrial and then a complete dismissal of all charges," Guo said.

The analysis by MIT Technology Review also showed these integrity cases have been pretty unsuccessful. Only six defendants have pleaded guilty, and Lieber is the first conviction. That's about as much as the number of cases where charges were dropped by the government or declared a mistrial. The rest are still pending.

After Technology Review's reporting, the DOJ removed some of the dismissed cases from their online database.

That Tech Review analysis found another troubling but unsurprising statistic: 88% of all people charged under the Initiative were of Chinese heritage. The DOJ has insisted it's investigating suspicious conduct, and not based on race.

But critics say there are a few problems with that argument, like considering how broad the initiative's reach is. It's worth noting the DOJ still has no strict definition of what a China Initiative case is, and this accusation of racial profiling even came up during Charles Lieber's trial.

"One of the reasons that he was being investigated was because the Department of Defense investigators found it really suspicious how many Chinese students he had in his laboratory," Guo said. "You can perhaps argue that you're not racially profiling Charles Lieber, but that is a case of racially profiling the students that worked for him. It's increasingly clear, as this program has been going on, that Chinese heritage scientists are seen as perpetual foreigners as as people whose loyalty is in question."

More cases under the initiative are scheduled to go to court in 2022, but scrutiny against the program is building momentum.

Former DA Andrew Lelling, one of the creators of the initiative, admitted "the initiative has drifted and, in some significant ways, lost its focus. DOJ should revamp, and shut down, parts of the program."

A former prosecutor for the China Initiative admitted it has "gone off the rails" — and he later went on to defend a medical researcher charged with visa fraud.

In all, more than 1,600 scholars and administrators from more than 200 universities have petitioned Attorney General Merrick Garland to end the China Initiative.

In October, the Attorney General told Congress that there will be a review of the program, but things are not slowing down.

"We continue to open cases involving the People's Republic of China daily, as the director said," Attorney General Merrick Garland said. "We will not in any way, let up our concerns about Chinese."

In the meantime, that's troubling news for defendants like professor Franklin Tao, who taught chemical engineering at the University of Kansas. He was the first indictment of the China Initiative back in August 2019.  He failed to disclose a potential contract teaching job in China and is now facing up to 20 years in prison. These cases drag on and can be destructive even before reaching trial. His wife recently told reporters she's now working three jobs to pay for the legal fees.

So as time passes to see what's next for the China Initiative, these cases are continuing to bring havoc to the defendants' lives and careers — and that's taking its toll on the wider research communities.

"One of the biggest effects of the China initiative is how it has chilled research collaboration for a lot of academics," Guo said. "What that has done is discouraged a lot of people from hiring Chinese students from continuing to collaborate with Chinese peers, and in some of the cases of the university professors that have themselves been investigated, it's meant that they've gone back to China, which is absolutely the opposite of what the United States really wants."