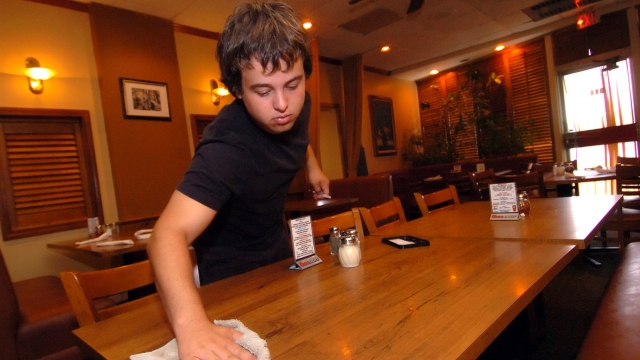 SMS
Employment Landscape Leaves Teens With Many Summer Job Opportunities
By Maura Sirianni
By Maura Sirianni
May 22, 2022
According to the Bureau of Labor Statistics, about one-third of U.S. teens age 16 to 19 are currently working.

If you've gone to a restaurant lately, or maybe a salon, you've likely noticed the lingering "help wanted" signs.

"If we don't get enough (workers), typically what we do is we have a contingency plan where we're open either on weekends or shorter hours during the week, so we can still open but with very limited hours," said Josh Reusser of Salt Lake County Parks and Recreation.

Employers across the country need help and they're willing to pay. A post for a summer lifeguard position in Charlottesville, Virginia, is offering $15 an hour.

"Kids have lost two years of maturity," said Marie Schwartz, chief executive of TeenLife Media, a national online directory of enrichment programs and activities for teens grades 7 through 12. During the pandemic, teen summer employment hit a new low. Two years later, Schwartz says it's imperative for this age group to catch up on critical life experience.

"I think jobs are extremely valuable. There's nothing like getting a paycheck. Especially jobs involving the public, I think those are probably the most valuable jobs for teenagers; working as a lifeguard, at a supermarket, restaurant or snack bar," said Schwartz.

Schwartz said in addition to working a summer job, an activity or program is another great way for teenagers to socialize with their peers and make new connections. TeenLife currently lists more than 4,000 summer programs, including hundreds of free ones in various areas of interest.

According to the Bureau of Labor Statistics, about one-third of U.S. teens age 16 to 19 are currently working. The most recent numbers show unemployment in that age group was 10.2% in April. Last April, a then-record 4 million people quit their jobs, and teenagers willing to work became highly sought after. That month, 16 to 19-year-olds were hired more than any other age group, the Bureau of Labor reported. This summer, thanks to a tight labor market and rising wages in hourly jobs, that momentum is still going strong.

Schwartz says it's also up to parents to get teens involved this summer.

"You just have to involve them in that decision and say, OK, search for three jobs on this website or look for three programs on TeenLife and let's talk about it," said Schwartz.