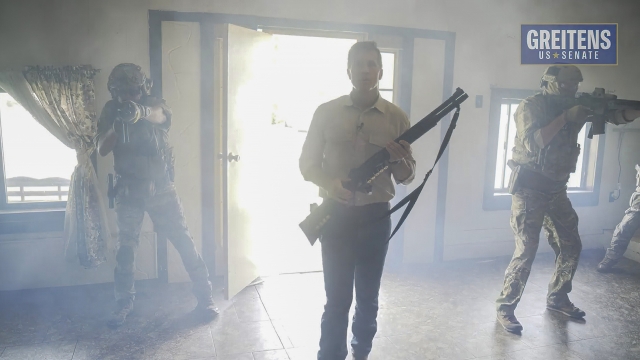 Republican candidates this year are firing off a lot of campaign ads about guns.

Guns in campaign ads are nothing new, but this cycle there’s been a shift from targeting policy, like Democratic Sen. Joe Manchin once did, to going after specific groups of people.

Sampson says we’ve seen guns brought into the conversation in frustration with government in a number of ways, from Jan. 6 to appearing at protests over mask mandates.

"They're trying to signal 'I'm tough, I will protect you, I will make sure that the bad guys aren't able to take over,'" Sampson said.

But primaries are all about appealing to the base — something experts say is accomplished quickly with these types of ads.

"It's really about elected officials doing what they think their voters demand in primaries, and that's, you know, in these cases, zero constraints on weapons of war or military hardware,"

While Facebook removed Greitens’ ad “for violating our policies prohibiting violence and incitement,” Twitter kept it up because of “public interest," as did YouTube. These social media companies play whack a mole with these kinds of ads, and experts say the more people see these images and are willing to accept violence as a means of expressing political views, the more dangerous politics could be in the future.

"This increased focus on literally shooting your political opponents encourages people to do things like storm the U.S. Capitol, threaten the lives of election workers, a shooting member, the House of Representatives and so on,"