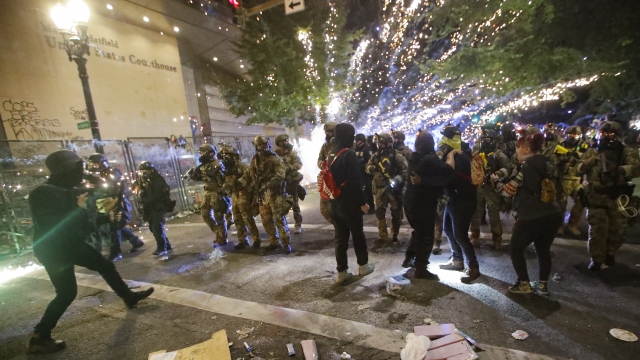 The scene capped another night turbulence as thousands of demonstrators turned out to protect President Trump's deployment of federal officers in the city. Federal agents declared the gathering "unlawful assembly" and reported one officer was injured.

The protest occurred hours after a federal judge blocked Oregon's attempt to seek a temporary restraining order barring some tactics by federal agents. The Oregon attorney general argued she was trying to prevent authorities from injuring protesters.

But the U.S. District Judge said Attorney General Ellen Rosenblum wasn't a protester and couldn't request such an order on demonstrators' behalf.

Rosenblum has accused President Trump's agents of "secretly stopping and forcibly grabbing Oregonians off our streets."