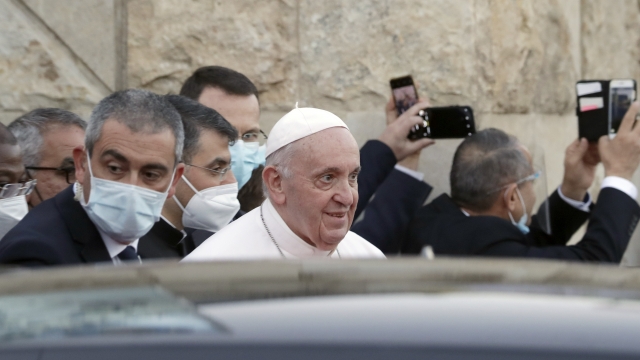 By Ben Schamisso
March 5, 2021
It's the pope's first trip abroad in 15 months — and it's taking place while Iraq faces a virus resurgence and continued rocket attacks.
SHOW TRANSCRIPT

A historic moment. For the first time ever: a pope setting foot in Iraq.

Pope Francis arrived in Baghdad on Friday, beginning a three-day tour of the country to boost the fading Christian community and promote interfaith harmony.

It's the pope's first overseas trip since the pandemic began — and it's taking place while Iraq faces a virus resurgence and continued rocket attacks.

"Having the head of the Catholic Church come in a time of pandemic, in a time of civil unrest, speaks volumes for the Christians in Iraq," said Amir Hussain, chair and professor of theological studies at Loyola Marymount University.

The 84-year-old Francis and his delegation have all been vaccinated. But most Iraqis have not, raising concerns about the trip's potential to fuel infections.

Still, the Vatican says health measures are being enforced — and the significance of the trip far outweighs the risks.

"What we're really concerned about is saving people's lives and the sectarian violence in Iraq that has literally claimed thousands," Hussain said.

After meeting with Iraqi leaders upon his arrival, the pope visited a church where ISIS suicide bombers killed nearly 60 people in 2010.

The Christian minority in Iraq, one of the world's oldest, has been severely persecuted over the past 20 years, especially during the ISIS insurgency.

This has created a mass exodus. Only around 300,000 Christians remain in the country today, down from nearly 1.5 million in the early 2000s.

Continuing his long-standing effort to improve relations with the Muslim world, Francis is meeting on Saturday with Iraq's Grand Ayatollah Ali al-Sistani, the country's most revered Shiite leader.

"He's going to stand up and come to the door and invite the pope in. That's going to be an extraordinary moment of these two frail old men who are working together for peace," Hussain said

For a nation that's been torn apart by war for decades, the papal trip represents a remarkable opportunity to showcase its relative stability.