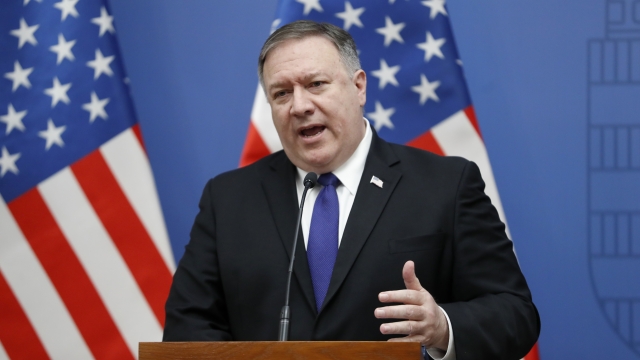 SMS
Pompeo Says US Is Ready To Speak To Iran With No Preconditions
By Alec Larson
By Alec Larson
June 2, 2019
Iran's foreign minister responded to Pompeo's offer by saying, "He is imposing pressure... It does not work in dealing with Iran."
SHOW TRANSCRIPT

On Sunday, Secretary of State Mike Pompeo signaled that the Trump administration would be open to having talks with Iran with "no preconditions" as tensions simmer between the two countries.

"We're prepared to engage in a conversation with no preconditions, we're ready to sit down with them. But the American effort to fundamentally reverse the malign activity of this Islamic Republic, this revolutionary force is going to continue," said Secretary of State Mike Pompeo.

Last month, the U.S. issued new sanctions against Iran, targeting lucrative areas of the country's economy. The move was not received well by the Iranian government.

Speaking with ABC News, Iran's foreign minister responded to Pompeo's offer by saying, "He is imposing pressure. This may work in a real estate market. It does not work in dealing with Iran."

Switzerland's foreign minister says the country would be willing to work as an intermediary between America and Iran, but only if there is a request from both sides.