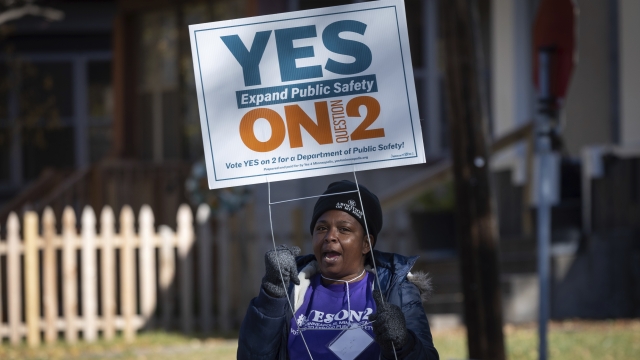 SMS
Voters To Decide Fate Of Minneapolis Police
By Jamal Andress
By Jamal Andress
November 2, 2021
The ballot question is to decide whether to replace the local police department with a new Department of Public Safety.

In the first national Election Day since George Floyd was killed, police reform is on the ballot across the country.

In Minneapolis, there's a ballot question to decide whether to replace the local police department with a new Department of Public Safety.

This vote does three things — splits power over the police department between the mayor and the City Council, removes the requirement the city maintain a certain number of police, and gives city leaders 30 days to pick an interim Department of Public Safety commissioner.

Salaah Muhammad is a regional field manager at Color of Change. He has been campaigning in Minneapolis to get this measure passed.

"What if we didn't just have police respond to every situation? What if police were actually just focused on their job?" Muhammad asked. "It's understandable, believable, why folks feel like they need a concrete plan for this. But essentially, what I go back to is, this moment of removing the handcuffs of our city government and saying that the folks that we vote for — city council and the mayor — can collectively take the voices of our community and expand public safety so that it's no longer police-only option."

Proponents of the measure say this will allow Minneapolis to hire social workers to respond to mental health emergencies, rather than armed police, and allow the city to hire trained deescalation experts to resolve noise complaints or domestic disputes. All the while holding on to armed police officers for violent 911 calls.

But for some Minneapolis residents, even those in the activist community, this measure doesn't provide enough details.

Nekima Levy Armstrong is a civil rights lawyer and activist in Minneapolis. She places the blame for poor planning on City Council.

"I think that people should be able to vote on the public safety charter amendment — so let me also make that clear. At the same time, people need to know what the heck they're actually voting for," she said. "I think that they knew what they were getting themselves into. And for a while, they enjoyed the headlines. So, while they were enjoying being on CNN, talking to The New York Times and gloating about dismantling MPD — what they weren't doing was coming to the Black community to get an understanding about what people are asking for. And understanding that people want to feel safe if they have to call 911."

Police reform questions are also on the ballot in Austin, Texas; Albany, New York; Denver and Cleveland, showcasing the clear, substantial impact George Floyd is still having on the country.