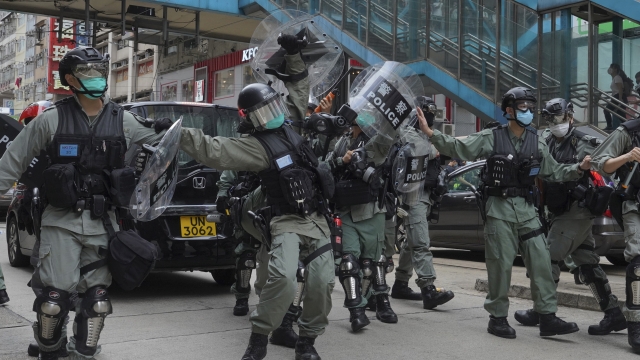 By Katherine Biek
May 25, 2020
Thousands of people protested in Hong Kong Sunday against the Chinese government's plan to impose a national security law on the city.
SHOW TRANSCRIPT

Thousands of demonstrators gathered in Hong Kong Sunday to protest against the Chinese government's plan to impose a national security law on the city.

It didn't take long for things to turn violent. Police officers responded by firing tear gas and water cannons after they said protesters set up roadblocks, vandalized nearby shops and set fire to trash. Officers said they arrested at least 180 people — mostly on suspicion of unlawful assembly and disorderly conduct in a public space.

A spokesman for the Hong Kong government criticized the protest as "outrageous," noting it posed "a serious threat to public safety."

Sunday's protest came just days after China introduced a draft proposal for the national security law at the annual National People's Congress. The legislation would strengthen "enforcement mechanisms" to prevent and stop all activity in Hong Kong aimed at overturning the Chinese government. It would also ban foreign interference and terrorist attacks in the semi-autonomous region.

She's tried to reassure residents that "Hong Kong will remain a free society." But critics see the legislation as China undermining civil rights guaranteed to Hong Kong under the "one country, two systems" model.

Lawyers and politicians from 23 countries have criticized the move by China. And Taiwan's president pledged "necessary assistance" Sunday to those "who are struggling to defend Hong Kong's core values."