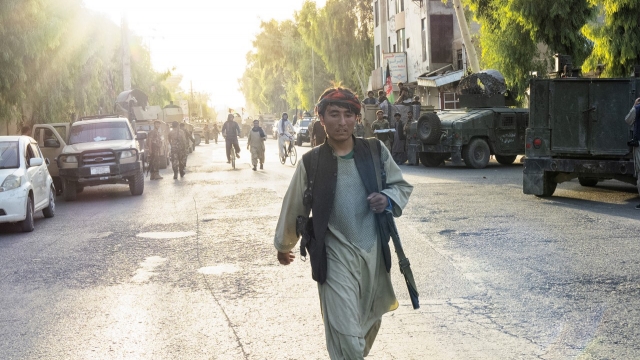 "The Taliban is pretty much parading all around town now," Juan Carlos, a photographer, said.

The voice you are hearing is Juan Carlos, a photographer who is currently trapped in Kandahar, Afghanistan. The Taliban took control of the city less than a day ago. The exclusive video you're watching is of Taliban fighters, parading down a main road on motorbikes and in cars, with Afghan security forces nowhere to be seen.

"I expected this, or for the city to be in this situation within a week. But literally within 72 hours. The city was taken over," Juan Carlos said. "We are trying to negotiate or find a way to be able to reach the airport to get out."

Speaking with us from his hotel room, as he and other journalists await evacuation approval, Juan Carlos says the Taliban are making their presence known throughout the fallen city. Motorcycles, once banned by local government because of their use by the Taliban, now crowd the roads.

"Now the Taliban literally took over the city yesterday officially, so motorcycles all over the place. And most of motorcycles are Taliban fighters with their guns, RPGs sometimes and AK47’s, just parading up and down the street, " Juan Carlos said.

With the city firmly in their control, Juan Carlos says the Taliban are now working to ensure no one attempts to take any action against them.

"They've set up checkpoints at almost every corner. So everywhere you go, you're always being detained," Juan Carlos said. "The Taliban have started searching, going house to house, searching for weapons."

Despite the checkpoints and house searches, Juan Carlos says some civilians have begun moving about the city.

"You don’t have the same amount of people going, either walking or using their vehicles, around. But there's some movement of civilians," Juan Carlos said. "We're seeing many civilian casualties, injuries, as well as from the military."

As residents grapple with the city's capture....

"They were very sad and angry at the same time at the Americans for withdrawing," Juan Carlos said.

...the Taliban are setting their sights on their final target roughly 300 miles away.

"They're just going to go straight to Kabul, because that's the final frontier. That's their last goal in order to pretty much take over the country," Juan Carlos said.