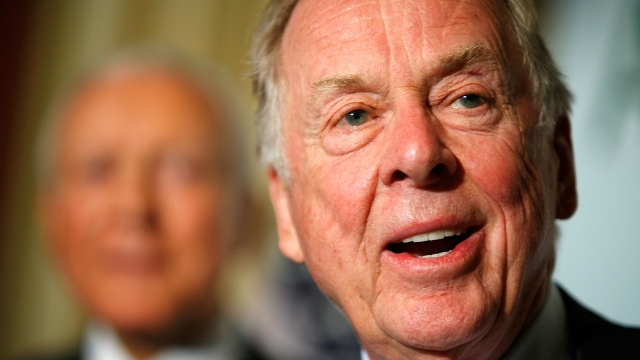 Pickens died of natural causes in his Dallas home on Wednesday while surrounded by loved ones, according to a statement on his website. He had suffered a series of strokes, as well as head injuries sustained in a fall in 2017.

Pickens built his reputation both in the oil industry and on Wall Street. Although he was known in the energy sector for his company Mesa Petroleum, he gained national attention in the 1980s after leading bids to take over bigger companies including Gulf Oil. His tactics earned him the ire of many corporate executives, but Pickens described himself as a "raider" who championed the rights of shareholders.

Later in his career, Pickens became an advocate for renewable energy. He said in 2009, "I've been an oilman all my life, but this is one emergency we can't drill our way out of."

He also donated millions of dollars to various causes throughout his lifetime, including his alma mater, Oklahoma State University. The school named its football stadium after him in 2003.

In a statement Wednesday, former President George W. Bush called Pickens "bold, imaginative, and daring," and said "he generously shared his success with institutions and communities across Texas and Oklahoma."

Pickens is survived by his five children, 11 grandchildren and "an increasing number" of great-grandchildren.