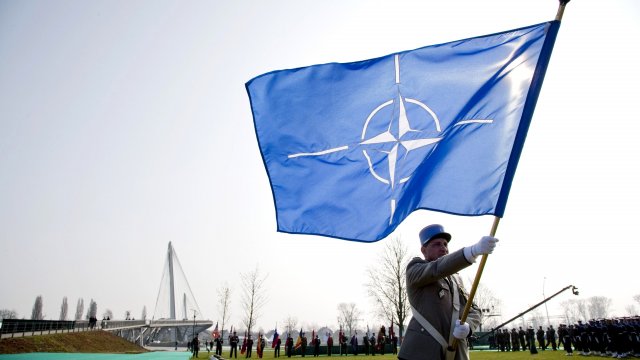 SMS
NATO Officials Exploring The Possibility Of Upgrading Missile Defenses
By Alec Larson
By Alec Larson
July 5, 2019
The move comes in preparation for the dissolution of a landmark arms treaty next month.
SHOW TRANSCRIPT

With the dissolution of a long-standing arms treaty imminent, NATO countries are currently considering the possibility of upgrading missile defenses to better defend themselves against Russian nuclear missiles.

Although NATO's spokeswoman has denied that any studies of the feasibility of upgrading missile defenses are underway, the New York Times reports that NATO military officials have begun preliminary discussions exploring such a plan.

After the United States withdrew from the Intermediate-Range Nuclear Forces Treaty in February, it will be terminated in August if Moscow and Washington do not come to an agreement to renew the 31-year-old treaty. The United States cited Russia's history of violating the treaty when it withdrew.

NATO Secretary General Jens Stoltenberg addressed the issue, saying, "The treaty is in danger. Unfortunately, we have not seen any signs of breakthrough and the time is running out. Today, I must urge Russia to once again to return to full and viable compliance with the treaty."

It is expected that NATO ambassadors are making a final attempt to persuade Russia to revive the treaty at the NATO-Russia Council meeting in Brussels.