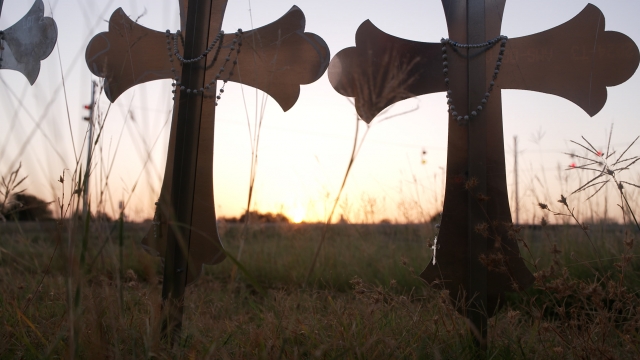 SMS
Millions Of Dollars Have Been Raised For Uvalde, So Who Has The Money?
By John Mone
By John Mone
July 1, 2022
Families of the victims and survivors of the Robb Elementary shooting are struggling with grief and financial burdens after the tragedy.

Berlina Arreola continues to visit an impromptu shrine of a tragedy which struck her family personally.

A gunman shot and killed her granddaughter, Amerie Jo Garza, 18 other Robb Elementary School students and two teachers on May 24 in Uvalde, Texas.

"It's getting harder and harder as the days go by missing our loved ones," Arreola said. "I mean, I miss Amerie dearly."

The road ahead is still tough for families.

"The last time I talked to her, I was waiting for a big job to come in so I could pick her up and go shopping, you know," Rodriguez said. "She took my phone and said, 'Let's do a selfie daddy.'"

Rodriguez, who is self-employed, finds it hard to motivate himself to get back to work.

Victim's families have needs, whether they be emotional, medical, or financial.

"We saw already there are initial efforts, but we want to be able to get an idea of when families are going to get disbursements," Sen. Gutierrez said. "I'm bringing in some folks that are going to advocate for them to maximize those funds as best we can."

He said he's learned lessons from past relief efforts after mass shootings, like the Sutherland Springs church attack in 2017.

The tragedy struck an already vulnerable community. Census data says close to 25% of people in the county are uninsured. Many live pay check to pay check, and paying for medical bills for survivors is simply a bridge too far. That's where these funds fit in.

"In 2012 after the Aurora theater shooting, survivors of that event came to us at the National Center for Victims of Crime and said that they didn't like how their fund was being administered, and they asked us to set up a new fund for them," Jeff Dion, executive director of the National Compassion Fund, said.

The National Compassion Fund, or NCF, is a group founded after a gunman murdered 12 and injured 70 in the Aurora, Colorado theater shooting almost 10 years ago.

One of those victims was Micayla Medek. When donations did not reach families in need, her cousin was moved to action.

"The first $100,000 went to ten area nonprofits, and we found out that they were a victim relief fund, was not actually going to go directly to the victims," Anita Busch with Victims First said. "We had kids with brain injuries and no insurance, and we have 12 people to bury."

Busch works alongside the NCF. The foundation says its role is to make sure victims and survivors get direct assistance from every dollar donated.

"But nobody really is planning for donation management, and we know that this happens just about every time," Dion said.

The foundation has overseen collection efforts for 23 mass casualty events and helped disburse more than $100 million.

"So we had to get up off our knees in grief and fight so that the donations would actually get to the victims," Busch said.

This echos the sentiment Arreola has — that there is no price tag on bringing back loved ones.

"The bills don't stop... for a broken, unfortunately," Arreola said.