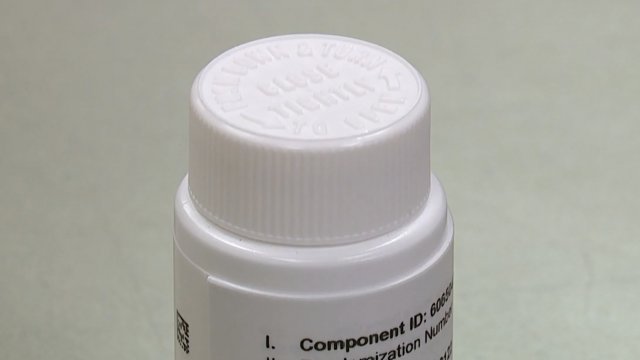 SMS
Merck, Ridgeback Announce Trial Results For Antiviral Medication
By Haley Bull
By Haley Bull
October 1, 2021
Merck said it's already producing the drug, and plans to make 10 million courses of treatment by the end of the year.
SHOW TRANSCRIPT

A potential breakthrough in treating COVID-19: Merck and Ridgeback Biotherapeutics announced their oral antiviral medicine significantly reduced the risk of hospitalization and death in a trial.

Merck said it plans to seek emergency use authorization from the FDA as soon as possible for its pill. If it moves forward, it would be the first treatment of its kind for COVID-19.

The company said in a phase 3 trial, it reduced the risk of hospitalization or death by about 50%. According to the company, about 7.3% of patients who received the pill were hospitalized or died within the first 29 days, compared to 14.1% of patients treated with a placebo.

"More tools and treatments are urgently needed to fight the COVID-19 pandemic, which has become a leading cause of death and continues to profoundly affect patients, families and societies, and strain health care systems all around the world. With these compelling results, we are optimistic that molnupiravir can become an important medicine as part of the global effort to fight the pandemic," Robert M. Davis, chief executive officer and president of Merck, stated in part in a news release.

Participants included non-hospitalized adult patients with mild to moderate COVID-19 and at least one risk factor.

"The patients that they used in the trials were in the outpatient arena, and it really is because of how this virus works, we really need to catch it early on with these antivirals, and so the optimal place to give these agents is going to be in the community," said Jamie Kisgen, PharmD., a pharmacy manager for infectious disease services at Sarasota Memorial Hospital.

The White House COVID Response Team has been briefed on the drug, looking ahead to doses for the U.S.

"If indeed it is authorized, as Dr. Fauci just described the process, the federal government has contracted to purchase 1.7 million doses to make this therapy available," said White House COVID-19 response coordinator Jeff Zients said during a briefing Friday.

The pill works by interfering with the multiplication of the virus.

"That makes it harder to enter new cells, spread through the body and make us sick, really badly sick," said. Dr. William Schaffner. "If we can cut off the virus at the pass, well then we can get better ourselves."

Dr. Schaffner is a professor of infectious diseases with Vanderbilt University Medical Center. He explained in addition to vaccines on the front end, it's good to have treatments on the back end. It's not a replacement for what we already have, though.

"We have other medications of course already, monoclonal antibodies, Regeneron, these are drugs that have to be given intravenously or by injection. Having a pill available makes it much easier and we hope much less expensive in order to provide early treatment that could be effective," said Schaffner.

Merck said it's already producing the drug, planning to make 10 million courses of treatment by the end of the year.