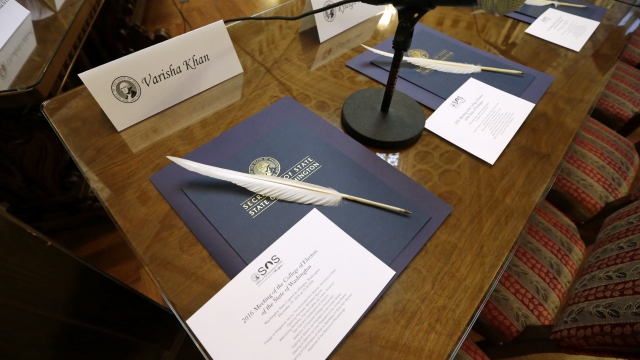 SMS
Some Crucial 2020 Election Events Are Coming Up In December

By Stephanie Liebergen
November 25, 2020
Dec. 8 is the target date for all states to have their results finalized. Then the Electoral College will vote on Dec. 14.
SHOW TRANSCRIPT

The November general election is weeks behind us, but some of the most important deadlines in selecting a new president come in December and January.

"Some of the key milestones that happen between Election Day and Inauguration Day include the county-level certification of results, the state-level certification results, and the actual Electoral College casting and transmission of those results to Congress," said Matthew Weil, the director of the Elections Project at the Bipartisan Policy Center.

Each state sets its own deadline for certifying the election results, and some states have no deadline at all. The process is designed to allow time for the lawsuits and recounts that we're seeing in 2020.

"The electoral process is actually moving along quite normally. We've had these legal challenges that haven't added up to much. But the activities in every state are taking place, as usual," said Steven Smith, a professor of political science at Washington University in St. Louis.

Federal law sets Dec. 8 as the target date for all states to have their results finalized. That's called the Safe Harbor deadline.

"If a state has finalized their split of electors, they picked which candidate is going to get the electoral college votes by Dec. 8, then Congress won't challenge those votes," said Weil.

The next key milestone happens on Dec. 14. That's when electors in each state will meet in their respective capitals and formally cast their states' electoral votes. Those votes are transmitted to Washington, D.C., where the new Congress will vote to approve them on Jan. 6, 2021.

"Is there anything that can happen between Dec. 14 and Jan. 6 that can change the results?"

"No, not really. Once the electors' votes are cast, they're actually signed and sealed and sent to Washington and not opened until they get to the floor of the House of Representatives, where the House and the Senate then open those ballots and and have them counted," said Smith.