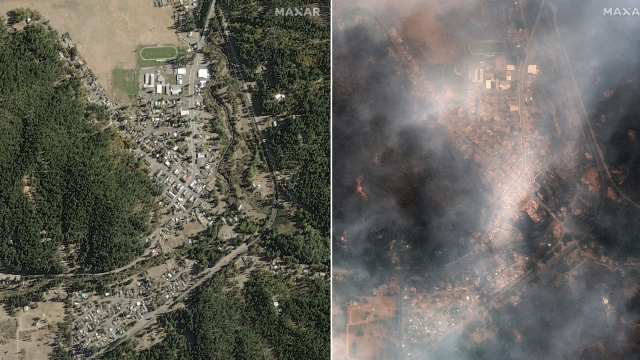 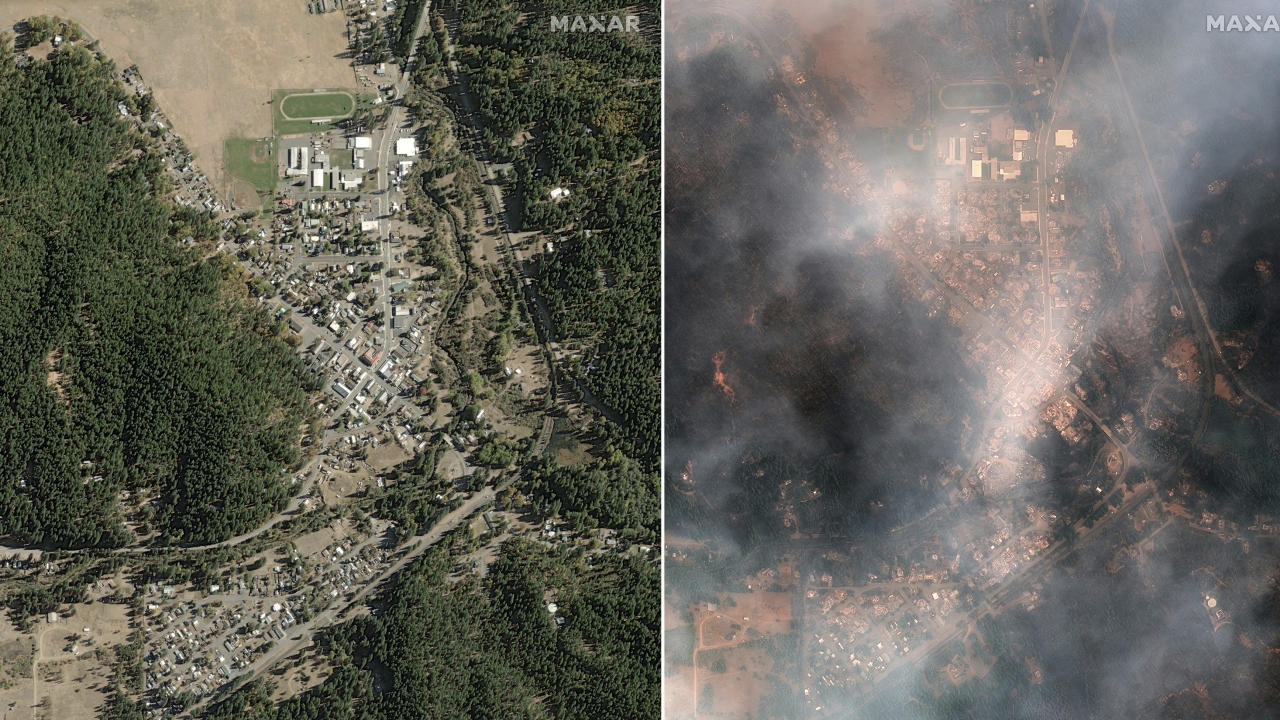 The dangerous fires are among some 100 large blazes burning Wednesday across 15 states, mostly in the West, where historic drought conditions have left lands parched and ripe for ignition.

Burning through bone-dry trees, brush and grass, the fire has destroyed at least 1,045 buildings, more than half of them homes in the northern Sierra Nevada. Newly released satellite imagery showed the scale of the destruction in the small community of Greenville that was incinerated last week during an explosive run of flames.

The Dixie Fire named after the road where it started on July 14 by Wednesday morning covered 783 square miles and was 30% contained, according to the California Department of Forestry and Fire Protection. At least 14,000 remote homes were still threatened.

The Dixie Fire is the largest single fire in California history and the largest currently burning in the U.S. It is about half the size of the August Complex, a series of lightning-caused 2020 fires across seven counties that were fought together and that state officials consider California’s largest wildfire overall.

In southeastern Montana, communities in and around the Northern Cheyenne Indian Reservation were ordered to evacuate as the uncontrolled Richard Spring Fire grew amid erratic winds.

The order included Lame Deer, where people who fled the fire early Tuesday had sought shelter, only to be displaced again that night when the fire got within several miles. The town of about 2,000 people is home to the tribal headquarters and several subdivisions is surrounded by rugged, forested terrain.

Also ordered to leave were about 600 people in around Ashland, a small town just outside the reservation with a knot of businesses along its main street and surrounded by grasslands and patchy forest.

No homes were reported lost, Rosebud County Sheriff Allen Fulton said. Two homes caught fire Tuesday but were saved, including one near Lame Deer. Sheriff's deputies used fire extinguishers on the flames and a passing fire helicopter dropped a bucket of water to put it out, Fulton said.

Heavy winds were forecast to return Wednesday, and authorities were concerned that the fire would again advance toward Ashland and Lame Deer.

The flames came right up to a subdivision outside Ashland along the Tongue River and were within several miles of the town by Wednesday morning. Powerful gusts Tuesday caused the blaze to explode across more than 230 square miles (600 square kilometers) as the fire jumped roads, creeks and fire lines created in an attempt to prevent it from growing. It was 0% contained Wednesday morning.

Heat waves and historic drought tied to climate change have made wildfires harder to fight in the American West. Scientists have said climate change has made the region much warmer and drier in the past 30 years and will continue to make the weather more extreme and wildfires more frequent and destructive. The fires across the West come as parts of Europe are also enduring large blazes spurred by tinder-dry conditions.