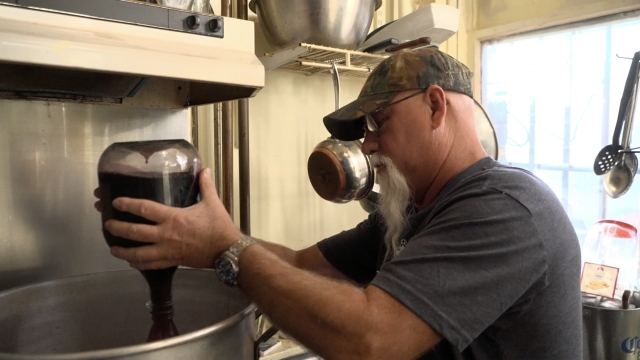 Holidays are all about tradition, especially inside one of the oldest bars in Chicago.

At Simon's Tavern, tradition is all about pouring a special holiday drink.

Glögg is a Scandinavian Christmas drink. It's a staple in Swedish households and a neighborhood favorite.

"The best glögg comes from this place," one patron said. "And around the holidays this is where my husband and I have a glögg."

Simon's Tavern owner Scott Martin showed Newsy how the holiday drink is made.

"So glögg is served hot," he said. "It takes me about three hours to cook a batch of glögg and after it's all cooked, it'll cool down overnight and then in the morning, brandy will go into it — and a couple of secrets."

The pouches will later go into Martin's 15-gallon pot from World War II, which is filled with some water, freshly squeezed orange juice, orange rinds and raisins.

After cooking for an hour, Martin pours in gallons of red wine. He always pours the last gallon delicately and tops it off with loving words.

"Tradition would have it that upon drinking your first glögg, you're going to place a cookie in the palm of your hand," he said. "Then you're going to make a wish to yourself, OK? And after making a wish, you're going to gently press down, gently poke the center of the cookie. If the cookie breaks into three pieces, you go right to the glögg and take a sip before you talk at all."

Simon's Tavern sells about 1,500 gallons of glögg a year.

"I've been waiting, actually, for Thanksgiving I think is when you guys start to sell it," another patron said. "Glad it's here. Cheers!"

It's a holiday tradition to toast to.