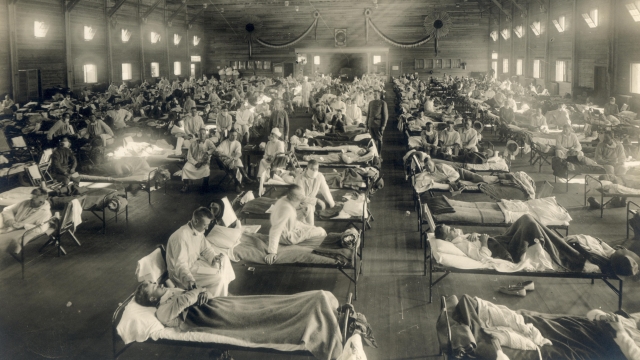 From the moment the coronavirus started to take root in the U.S., then-President Donald Trump continually downplayed the disease — sometimes flat out lying.

"Death is way down from where it was," then-President Donald Trump told Axios in an interview in August of 2020.

Many journalists called out the misinformation in an attempt to get the truth out to the public. But that wasn’t the case in the worst pandemic in U.S. history.

"The refusal to tell the truth killed people. That's the biggest single lesson coming out of 1918," said historian John Barry, author of "The Great Influenza."

"The pandemic was minimized as much as it has been today," said Barry. "The motive back then, of course, was they were afraid that any negative news would hurt morale and damage the war effort."

In 1918, the U.S. was in the last stretches of World War I. To President Woodrow Wilson, talk of the pandemic was a distraction. Patriotism at all costs was needed — to ask Americans to send their boys overseas. And to send their money.

Wilson assembled a powerful propaganda machine. And it worked.

"Newspapers were entirely complicit. They were either intimidated or volunteered," said Barry.

Some newspapers covered the war and barely mentioned the pandemic. Others didn’t push back when public officials called it "ordinary influenza."

"This was no ordinary influenza by another name. People could die 12 hours after the first symptoms," said Barry. "Including bleeding – not only from the nose, but from the mouth, from the eyes, from the ears."

On one day alone, the city of Philadelphia lost 769 people to the illness and was in the throes of a second deadly wave. Yet when the Philadelphia Inquirer came out the next day it reported:  “Philadelphia will soon be out of the clutches of the epidemic influenza”

"When they finally, belatedly closed theaters, restaurants, schools and so forth, one of the newspapers actually said this is not a public health measure, you have no cause for panic or alarm," said Barry. "People are dying all around you. I mean, really, how stupid do they think people were?"

And the Sedition Act of 1918 helped newspapers fall in line with the president’s objectives. Now you could get 20 years in prison if you "willfully utter, print, write or publish" anything disloyal about the U.S. government.

So when Halbert L. Hoard, publisher of the Jefferson County Union in Fort Atkinson, Wisconsin, wrote an editorial criticizing the military for not doing enough to save soldiers from dying from the disease, Barry said the Army started to prosecute him.

"As the pandemic proceeded, that prosecution was dropped," Barry said.

The Act ended up getting repealed after the war. But the damage had already been done. More Americans died from the 1918 flu than from the war. In fact, there were more American deaths from the pandemic than in the battles from the Civil War both World Wars and Vietnam – combined.

"The whole point of the freedom of the press is the freedom to criticize people in power," said Barry.