Evictions On The Rise Months After Federal Moratorium Ends 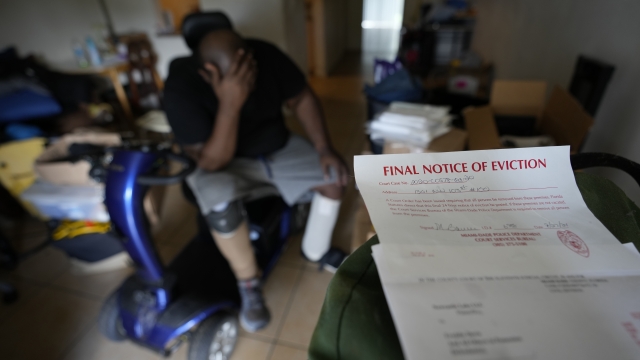 SMS
Evictions On The Rise Months After Federal Moratorium Ends
By Associated Press
By Associated Press
December 16, 2021
In the first half of October, numbers were 38% above August levels and 25% higher than in September, but they're still well below pre-pandemic levels.

Soon after losing his trucking job amid the pandemic, Freddie Davis got another blow: His landlord in Miami was almost doubling the rent on his Miami apartment.

Davis girded for what he feared would come next. In September he was evicted — just over a month after a federal eviction moratorium ended. He's now languishing in a hotel, aided by a nonprofit that helps homeless people.

The 51-year-old desperately wants to find a new apartment. But it's proving impossible on his $1,000-a-month disability check.

“We live in America, and the thing is, people like me, we got to go to the street if we don’t have no other place to go because we can’t afford rent,” said Davis, who lost a leg to diabetes, suffers congestive heart failure and is recovering from multiple wounds on his other leg and foot. “I really can’t do nothing.”

The federal ban, along with a mix of state and federal moratoriums, is credited with keeping Davis and millions of others in their homes during the pandemic and preventing the spread of the coronavirus.

There was a brief lull in evictions filings after the ban ended. But housing advocates say they're on the rise in many parts of the country —- though numbers remain below pre-pandemic levels due to the infusion of federal rental assistance and other pandemic-related assistance like expanded child tax credit payments that are also set to end.

Part of the increase is due to courts catching up on the backlog of eviction cases. But advocates say the upsurge also shows the limits of federal emergency rental assistance in places where distribution remains slow and tenant protections are weak. Rising housing prices in many markets also are playing a role.

Among places where eviction filings are returning to normal are Connecticut as well as Houston, Indianapolis, and Cincinnati and Columbus, Ohio, according to the Eviction Lab. Florida, too, has seen a significant rise, with filings in Tampa and Gainesville returning to near pre-pandemic levels.

"There was a batch of initial commentary coming out when the moratorium ended and the tone ... was, well, there wasn’t a tsunami so we don’t have an eviction crisis on our hands,” said Ben Martin, senior researcher at Texas Housers, a nonprofit focused on housing issues.

“That initial narrative was somewhat misleading. What we are seeing is a reflection of reality, which is that evictions take time to work their way into and through the court system.”

Among the concerns is that some landlords who got federal assistance are still evicting tenants. A survey of nearly 120 attorneys nationwide from the National Housing Law Project found 86% had seen cases like this. They also saw increasing instances of landlords lying in court to evict tenants and illegally locking out tenants.

“In many states, landlord tenant law is antiquated and designed to provide results for landlords," said Shamus Roller, executive director of the National Housing Law Project. “Instead of adjudicating the facts, courts function as conveyor belts, moving tenants toward eviction.”

Among those who contend they were illegally evicted is Faye Moore. The 72-year-old returned home from work in October to find her life spread out on the sidewalk.

Behind several thousand dollars rent on her two-bedroom townhouse in an Atlanta suburb, Moore figured she would get the chance to present her case to a judge, including that management refused to take her rent money for months and that she was given no notice before she was evicted.

“I’m devastated. It was a house full of furniture. Everything,” said Moore, a retired mental health therapist who is now staying in a hotel with her 61-year-old partner, Garry Betared. “It was like a storm came in and devastated everything. I can’t find my important papers or anything.”

Cicely Murray, a HUD housing counselor with the Neighborhood Assistance Corporation of America who is working with Moore, was most upset that the couple was evicted without a court hearing and forced to fend for themselves.

“I’m angry that anyone would put an elderly couple out without trying to figure out what resources are there,” Murray said. “We are still in a pandemic. ... You are putting people in precarious situations who are some of the most fragile.”

As Christmas approaches, there are plenty of signs that eviction cases will keep rising.

According to the U.S. Census Bureau’s Household Pulse Survey, those saying they weren't confident of paying next month’s rent increased from about 5 million at the end of September to 6.3 million in the latest data.

Landlords, especially smaller ones who own a handful of apartments, have also struggled. They believed the moratorium was illegal and saddled them with months of back rent they may never get back. Others were forced to lay off maintenance staff or sell units as they awaited federal rental assistance that was slow to be distributed.

Some localities have lagged behind in getting out their portion of the $46.5 billion in federal Emergency Rental Assistance. According to a November report from the National Low Income Housing Coalition, 28% of grantees — 32 states and 80 localities — spent less than 30% of their first allocation of money and risk losing those funds.

Among them is Nebraska, which spent only 6% of its funding through September and just 7% through October. Some landlords are refusing to take part in the program, said Caitlin Cedfeldt, a staff attorney at Legal Aid of Nebraska, while others have grown tired of waiting and are moving to evict. Tenants, some of whom got initial help but still face economic hardship, are being told they can't yet reapply for additional help.

Missouri only spent 18% of its funding through September but has since improved.

“We have so much more work to do,” U.S. Rep. Cori Bush, a St. Louis Democrat, said, citing data showing that evictions during the pandemic “have taken lives.”

Gene Sperling, who is charged with overseeing implementation of President Joe Biden’s $1.9 trillion coronavirus rescue package, said some increase in evictions was inevitable after the ban ended. "But fortunately because the Emergency Rental Assistance program is now paying full back-rent to about 500,000 renters each month, the eviction tsunami that experts feared has not occurred,” he said.

On the flip side are states and cities running out of rental assistance. The Treasury Department expects that upwards of $30 billion, or about two-thirds of the money, will have been spent or allocated by the end of the year. As the law dictates, Treasury is expected to begin reallocating funds from places not spending it to those in need.

The state of New York has spent or committed nearly all of its money, as has Philadelphia. California will soon exhaust its funds, while Atlanta has closed its program to new applicants. Austin, Texas, also stopped taking applications.

“It’s particularly concerning that a number of these programs are now shutting down because all funds have been expended or obligated,” said Peter Hepburn, research fellow at the Eviction Lab.

“If that funding gets removed, landlords may have less incentive to work with tenants.”