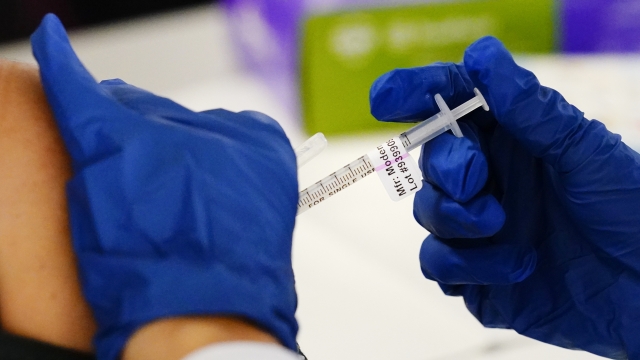 SMS
Could Next COVID Wave Mean More Vaccine Shots?
By Newsy Staff
By Newsy Staff
March 28, 2022
It's been at least five months since many Americans received their last vaccine shot, and studies show immunity can decline after that time.

We’re more than two years into the COVID-19 pandemic. Mask mandates have now been lifted in all 50 states, and nationwide case counts are at their lowest since July 2021.

But even if workplaces and public spaces are lifting their requirements, this pandemic is not over, and with the possibility of another wave starting as soon as a few weeks from now, this lull is an opportunity for health officials to get ready and limit the damage as much as possible.

Even as deaths have declined after a surge earlier this year, the U.S. is still quickly approaching 1 million total COVID deaths and is still averaging roughly 1,000 COVID deaths every day.

To put that in perspective, more Americans have died from COVID in the last four days than in the attacks on 9/11, and there are indicators we might see a rise in cases in the coming weeks.

Europe has seen a rise in cases from the Omicron BA.2 subvariant, and BA.2 is making up a growing portion of new cases in the U.S.

The size of any potential surge could vary regionally depending on levels of prior infection in a community, or whether the population is more likely to spend time outside or inside.

But the CDC's new recommendations only ask local governments to reinstitute a mask mandate at a much higher case level than before, and some experts worry that could be too late.

"Unfortunately, the country's public health agencies have communicated a confidence level that I don't think is fully commensurate with the data," Dr. Eric Topol, director of Scripps Research said. "People need to keep up awareness, and unfortunately, our CDC guidance isn't necessarily interpreted in the right way. I'm not even sure it's provided in the right way so that people keep their guard up."

Dr. Topol has led research efforts into detecting COVID spread and has done extensive COVID data analysis. He says we’re not too far from containing the virus right now, but that we should stay vigilant because of the sheer number of avenues available for the virus to replicate or change.

"The virus isn't tired,"said Dr. Topol. "It doesn't take vacations or sick days, and all it wants to do is replicate and get in living organisms — and as it turns out, not just people, but so many different mammal species that it's invaded."

Adding to the issues, the White House is warning that it’s running short on funding for tests, treatments and additional vaccines.

But, it’s not March 2020 — we have more knowledge about which public health measures can prevent COVID spread, and vaccines are widely available.

Vaccines are still highly effective at preventing severe disease, hospitalization and death from COVID. Even with the Omicron variant, vaccines make you less likely to get infected than if you’re not vaccinated.

But now, it’s been at least five months since many Americans received their last vaccine shot, even for some of those who got boosted, and with studies indicating that immunity can decline after that time, many Americans are wondering if they can receive their next shot.

A Kaiser Family Foundation poll from February found that 35% of vaccinated Americans would get a booster dose as soon as they can, and just over half of those surveyed had plans to get a booster at some point even if it wasn’t required.

It’s doubly true for the 17 million Americans who received the single-shot Johnson & Johnson vaccine and are currently allowed one booster under current CDC guidance unless they are immunocompromised.

It’s led to some medical professionals calling for a second booster, including Michael Z. Lin, a professor of neurobiology and bioengineering at Stanford University who has worked on potential COVID treatments and frequently publishes COVID data analysis on Twitter.

"A J&Jer who's been boosted once is like a freshly finished RNA vaccine recipient, so that, again, that protection is only about 60% plus versus Omicron infection, and it decays over time," Lin said. "It seems the best thing to do would be to recommend a second booster to J&J recipients again around five months after their previous shot."

While booster questions apply to all three of the currently authorized vaccines, the CDC has no plans to vote to recommend it yet until more research is done.

CDC representatives did not answer Newsy’s questions about when the guidance may be changed.

Until those are approved, however, those who have been boosted will likely have to manage with the protection they have.

But at the same time, unvaccinated people can improve their protection by starting the vaccination process, and those who have one Johnson & Johnson shot or two shots of Pfizer or Moderna can do so by getting any one of the three approved vaccines as a booster.