'Copaganda' And The Portrayal Of Good Cops In Pop Culture 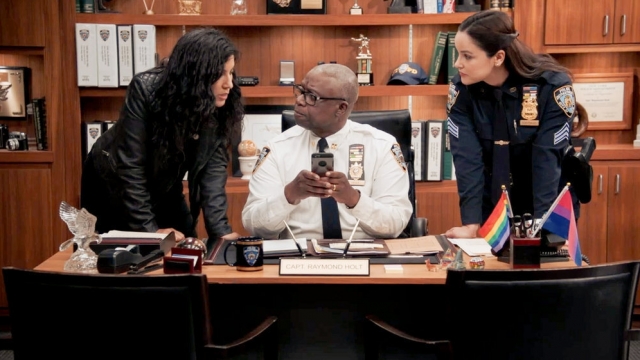 Crime shows, cop dramas and even sitcoms about detectives can be pretty aspirational when it comes to law enforcement.

In serious shows like "NCIS: Los Angeles," characters like those played by LL Cool J and Chris O'Donnell represent devoted public servants. And when cops are funny, like Andy Samberg's Detective Peralta in "Brooklyn Nine-Nine," they're endearing.

But amid the growing criticisms in real life about police brutality and racial injustice, some critics want audiences to think more critically about what they're watching.

"You could say that it's a fantasy of what a police department is, but it's actually depicting itself as the real thing, and it gives cover for the violence that the real thing is doing," Thrasher said. "I myself have been pepper sprayed and threatened by police many times. So I don't find police particularly funny."

He's referring specifically to "Brooklyn Nine-Nine" — a fan favorite comedy about the hunks and relationships of a fictional New York City precinct. After eight seasons, it aired its series finale last month.

Created by the same writers behind upbeat comedies like "Parks And Recreation" and "The Good Place," "Brooklyn Nine-Nine" was praised for its diverse cast and its handling of topics like racism, homophobia and sexism within policing.

In 2018, the show even won the award for best comedy series from GLAAD — an organization that recognized achievements in LGBTQ media.

However, when it comes to diversity and inclusion within the show, Thrasher worries it can skew viewers' perceptions of whether real-life progress is being made.

Beyond "Brooklyn Nine-Nine," other television shows like "S.W.A.T." or movies like "Monsters And Men" have centered their narratives around Black law enforcement professionals.

In real life, over 15% of law enforcement professionals are Black, which is slightly higher than the percentage of the Black U.S. population as a whole but less than most major American cities.

More diversity in the profession doesn't necessarily mean less deadly interactions between Black civilians and police, but the idea that representation and diversity can help solve racism and police misconduct is still a common theme in pop culture.

The CBS drama "S.W.A.T." centers its story on a Black sergeant in Los Angeles, and show creator Aaron Rahsaan Thomas rode along with real-life professionals to develop the series.

"It allowed me to have some insight on the real lingo, the terminology, and more of a sense on humanizing the people behind the badge," Thomas said.

Actor Denzel Washington — who has played a law enforcement professional 13 different times on screen — has also spoken on the importance of respecting and humanizing law enforcement after working with them to research his roles.

From an artist's perspective, it's important to do this research, but when the portrayals lean aspirational, critics like Thrasher say viewers should still be mindful.

"From a viewer's perspective, it can make people think that something better is happening," he said. "When in fact, the mere act of representation is covering up and encouraging people not to ask more questions about the perpetuation of violence."

Companies Are Supporting Abortion Care, But Do Their Benefits Follow?

Firework Costs Skyrocketing Across The U.S.

Small Towns Struggle With Fireworks Costs For Fourth Of July

How Did The Fouth Of July Become 'The Fireworks Holiday?'