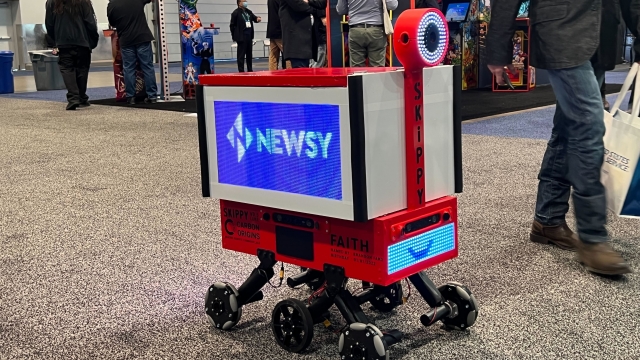 The way we collaborate, connect and commission work in the world is changing, and the CES tech conference gave a glimpse of that future.

A spokesperson representing the companies says they hope to work with celebrities and sell the virtual concerts they record to people eager for an immersive experience from home. Concerts are just one aspect, those who attended the conference also had a chance to experience a virtual shopping setting.

Virtual reality is also being used to operate businesses run by robots.

Amogha Srirangarajan, the CEO of Carbon Origins, is the creator of a robot named Skippy. The robot makes food deliveries at start-up companies, and at shared working spaces. So far prototypes have been launched in parts of California and in the Twin Cities, MN. The robot uses sidewalks to get around and is monitored by people working virtually.

To help Skippy navigate a human world, he is decked out with cameras to help detect obstacles. If the robot comes across a problem it can't solve, its virtual assistants, known as Skippers, jump in virtually and help.

John Deere had a big presence at the conference. The farming company announced their first autonomous tractor which can be operated by farmers with a phone. They also rolled out "See and Spray," a machine that uses cameras to detect weeds and sprays them.

"If this was the real sprayer it would be 120 foot wide with 36 cameras all the way across it as the machine drives through the field it sees a weed and sprays a weed," Marcus Hall, Product Marketing Manager at John Deere, said.

He says this advancement can help farmers meet growing demand as they face labor shortages. The company has yet to announce how much the technology they rolled out will cost.

The conference revealed technology aiming to create a more efficient world, but only time will tell the cost.

How To Charge A Country Full Of Electric Vehicles

Ukraine Hacks Add To Worries Of Cyber Conflict With Russia

Payment Platforms Like Venmo Required To Report Transactions To IRS

Rate Of Russian Ransomware Attacks Has Yet To Slow Down