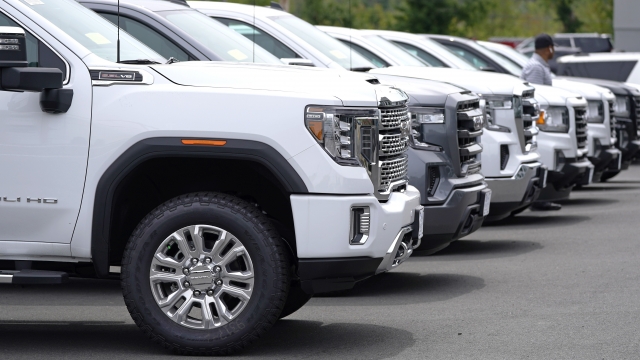 You can tell by just by driving by, auto body shops are busy.

He says, "Most of the people I know in the industry right now have really had an influx in the last year or more."

With inflation affecting the cost of new and used cars, more folks are trying to make their old cars last longer.

But at repair shops, like West Valley Collision, there's a supply chain-related shortage of parts tapping the breaks on getting cars fixed.

"It just takes a long time," Wareham said. "We've had some cars taken three four months just to get parts."

So, what are the main problems?

"Airbags and airbag modules — I'm pretty sure we will not be able to get that airbag right there," Wareham said. "Seat belts — you'd be surprised little brackets that you should just easily be able to get, we've had issues with that. ... It's been anywhere from a door handle, to a mirror, a door."

In Nashville, body shop owner Charles Childress says shortages are across the industry.

"There's no one manufacturer that hasn't been affected by it," he said. "It's just been across the board. With Honda, I've had to wait three months for a couple of things. Jaguar, I've waited about six months for one piece to finish it."

Some repair shops are using used parts to fix cars, which can work in some cases, like body repair. But in Las Vegas, shop manager Jim Robbins warns against reusing more sophisticated parts.

"Computers for the cars," he said. "They’re really hard to get a hold of. A lot them are after-market. Now, people are pulling out of used rigs, which I wouldn't suggest using at all."

Robbins says the backlog can be maddening for everyone involved from car owners to the repair shops.

"It makes it frustrating for us and the customer," he continued. "You bring your car in to get it fixed and somebody is telling you, 'I can't fix your car for several months.' That’s a bit disconcerting."

Moody's Analytics say the average monthly car payment is now a little over $700. But to keep your current car running, AAA has some tips, including following the maintenance schedule in your owner's manual, keeping your tire pressure up and parking your car in the shade if you can. That'll make it easier on your air conditioner.

Artificial Intelligence Is Now Used To Track Down Hate Speech

Pres. Biden Signs $280B CHIPS Act In Bid To Boost U.S. Over China

Musk Says Twitter Deal Could Move Ahead With 'Bot' Info

The Imbalanced Structure Of How Influencers Make Money