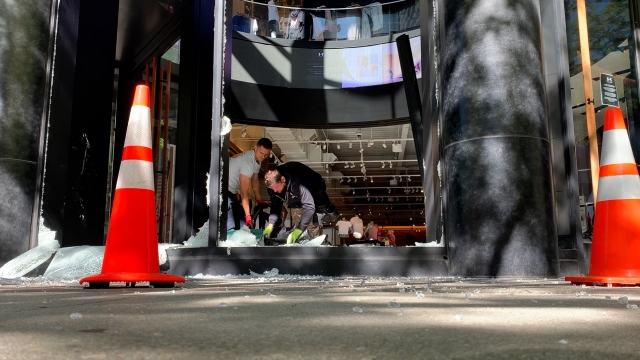 I looked out my window Saturday afternoon and saw a crowd gathered on Lake Shore Drive. Like any curious journalist, I decided to see what was going on.

I headed to the corner of Lake Shore Drive and Elm. It's a residential area just north of Chicago's famed Magnificent mile. Hundreds, likely thousands, of people were walking southbound on the inner drive. That's the residential portion of the iconic drive that runs along the city's lakefront. Some ran onto the outer drive—the expressway—bringing traffic in both directions to a standstill. They had some help from fellow demonstrators behind the wheel working to help those on foot stop traffic.

The protesters came from diverse backgrounds, but marched with what appeared to be a unified message: change.

Some chanted. Others just marched. Many held signs.

Some marched with their fists raised in the air. Drivers honked—some in support of the cause.

Law enforcement drove behind them bringing up the rear. The demonstrators headed peacefully on to Michigan Avenue. And I went back to my apartment.

But within hours, something changed. Demonstrators and police clashed. Some demonstrators tried to overturn this van. Some threw objects. Others set fires. Police responded with pepper spray.

As the curfew lifted Sunday morning, I headed out for a walk. It was my typical walk— the route I would usually take to Newsy's downtown studios each morning pre-pandemic. This was the first damage I saw: The windows of this bank had been smashed and the ATMs ripped out of the wall. George Floyd's name was spray-painted on one of the windows—along with an expletive geared toward police. I picked up a coffee across the street and headed down Delaware where some high-end stores had significant damage. Graffiti. Windows smashed. Mannequins knocked down. Some of the stores had been looted. Others had already been boarded up.

I turned south onto Michigan Avenue—The Magnificent Mile. And that's where the extent of the damage became clear to me. It was widespread.

The smell of perfume permeated the block outside Saks Fifth Avenue. Down the street, construction workers boarded up another high-end store. A sign nearby encouraging people to stay home due to COVID-19 now bore George Floyd's name and the acronym ACAB— All Cops Are Bastards. The Anti-Defamation League says the phrase is popular in the skinhead subculture.

Just south, a store that's been boarded up since March due to the pandemic has displayed this message since then:  “Our actions today will shape our tomorrow.” “RIP George Floyd" was now added to it.

The alarms still sounded at the Nike store. At Cartier—the glass was cracked, strong enough to thwart looters. Its storefront, though, covered in graffiti. Workers shoveled up the broken glass doors and windows at Under Armour. That's where my typical walk to work ended. The bridge I usually cross on Michigan Avenue had been raised. In fact, pretty much ALL of the bridges that span the Chicago River had been lifted.

As I headed west to find a bridge to cross, I passed this burned out car. It reeked of smoke.

In my quest to find a bridge, I met a guy named Charlie. He had a trash bag in hand and was picking up trash near one of the raised bridges.

I asked him why he decided to clean up.

He said, "Someone's got to do it. And I have Sunday off."

I passed a cone meant to mark off the area near a raised bridge. Someone wrote on it: "His name or mine? Stop 12 crime."

Demonstrators smashed in the windows at this CVS. The facades of nearby residential buildings now featured spray painted pigs. The smell of paint thinner filled the air. I finally found a bridge to cross into the Loop—the city's major business district. That's where some of the tensest confrontations happened Saturday night.

Crews were in the process of boarding up the shattered windows on this bank. I headed south on Michigan (now on the other side of the bridge). I was back on my typical walking route.

It was quiet—except for the constant chime of the bridge gates.

People walked in silence—taking stock of a building that burned overnight. The burning smell was pungent.

Having checked Newsy's building, which was ok, I headed down Lake Street to State—where there was also significant damage.

This hotel and restaurant had all of its windows smashed. The Macy's on State Street, formerly Marshall Fields, had been looted. Crews already boarded up most of it.

With broken glass on most blocks, I saw several people carrying their dogs. The big ones, too, like this husky.

Nearly two hours into my walk, I started passing more people on the street. More business owners had arrived to survey the damage. Together, several generations began the clean-up process. As I turned toward home, I noticed more Chicagoans, trash bags in hand, walking down the street. They were using their Sunday to pick up from what will be a dark night in Chicago history.