A New Bill Could Do Away With Daylight Saving Adjustments 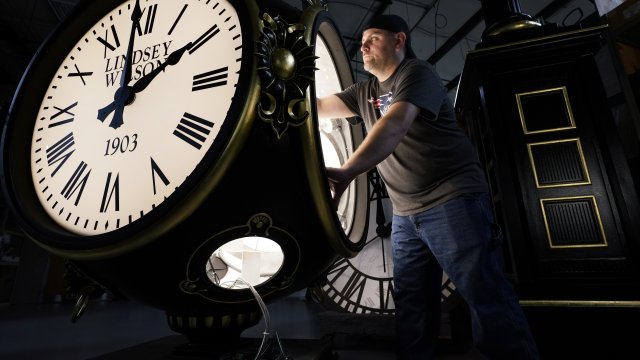 Here’s something you don’t see every day.  That’s Senator Kyrsten Sinema of Arizona presiding over the Senate and obviously very pleased at passage of the Sunshine Protection Act, which would put us all on the equivalent of daylight saving time year round.

The bill still needs passage in the House and the president’s signature. It could also make one man very busy.

Dr. Paul Eggert is in charge of the list used by nearly every computer and cellphone around the world to tell time.

"I just write things down," Eggert says. "My official title is 'coordinator,' whatever that means."

The time zone list Paul Eggert runs is how your phone knows what time it is even if you fly cross country or around the world. It's how chat invitations from a different time zone know your time.

"Basically if any government says the time zone is x or the daylight saving rules are y we write them down so that your phone or your computer can automatically translate universal time, GMT, into the appropriate time for you," Eggert says.

All our digital devices set their clocks to UTC, the French acronym for coordinated universal time.  The time zone database allows that to be converted to local time.  And it’s possible that this set of instructions is the most shared document on the internet.

We have time zones to keep our clocks more or less in sync with the sun.  360 degrees around Earth.  24 hours in a day.  A time zone should be 15 degrees of longitude wide… but that would be too easy.

"We just got email on the time zone mailing list today that Iran's parliament has passed a law to cancel daylight saving time," Eggert says. "That is, they've been observing daylight savings time not with U.S. rules, [but] their own rules. But apparently they've gotten tired of it and they're just going to do standard time all year."

The list will adjust for those changes which allows identifying an exact time in any time zone back to 1970. But changing the meaning of a time zone, which going to year round daylight time could mean, is a whole different concern.

"It's assumed that the abbreviation PST is short for eight hours behind Greenwich," Eggert says. "But it's not clear."

Probably not worthy of Y2K level of worry but some software, not touched in years, will cause programmers to scramble and write patches — all in the pursuit of later sunsets.