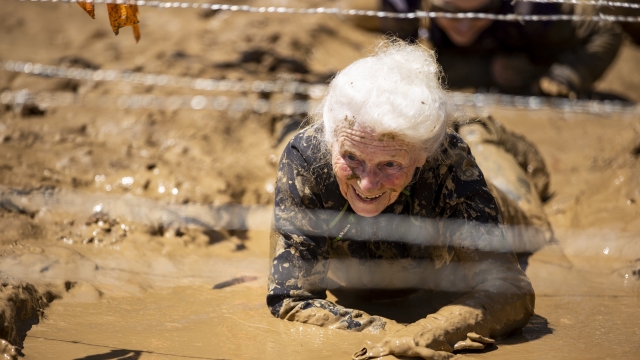 SMS
83-Year-Old Woman Becomes Oldest Tough Mudder Competitor
By Newsy Staff
By Newsy Staff
May 19, 2022
Tough Mudder races include obstacles like giant ice baths, a dash through 10,000 volts of electricity and climbing up a 12-foot ladder.

C.S Lewis once said: "You're never too old to dream a new dream," and that certainly applies to 83-year-old Mildred Wilson of Missouri, better known as "Muddy Mildred."

Mildred competed in her third Tough Mudder course earlier this month. Tough Mudder races include obstacles like giant ice baths, a dash through 10,000 volts of electricity or even climbing up a 12-foot ladder with giant rungs called the "ladder to hell."

Mildred holds the title for oldest person to complete in a 5K Tough Mudder.

"She's incredible. So, when she said she was interested in doing one [race] I knew she would be able to do it," her son Danny Wilson said. "She has fun doing it and then that's the that's the main thing to me. She's out there because she wants to be there and she's having a good time."

"Muddy Mildred" herself joined Newsy to talk about her competition, and to let people know that "you can do just about anything you plan, or want, to do if you give it a hard enough try."