Trial To Continue With Testimony In The Killing Of Ahmaud Arbery 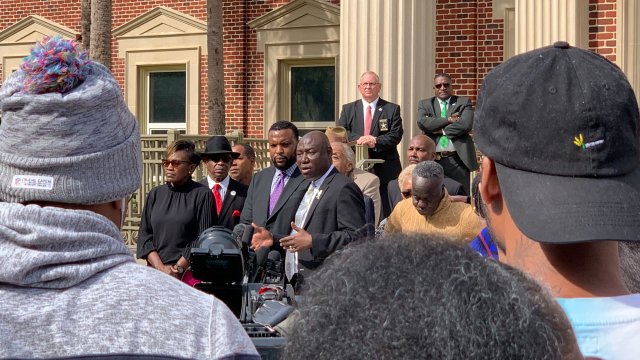 SMS
Trial To Continue With Testimony In The Killing Of Ahmaud Arbery
By Haley Bull
By Haley Bull
November 11, 2021
Jurors are likely to hear a deposition from the property owner of a home under construction in the Satilla Shores neighborhood.

On the steps of the halls of justice in Glynn County, Georgia, a call for justice.

"Dear God, we call you from so many places," Rev. Al Sharpton said in prayer during break.

As civil rights leaders back the family of Ahmaud Arbery, Sharpton sat in court on day four of testimony, where three men stand trial for murder in Arbery's death.

"What has happened in this case is a lynching in the 21st century," Sharpton said. "How do you have a self-defense evidence when there is no evidence that you had something to defend yourself against?"

Defense attorneys are pointing to self-defense, while prosecutors describe an attack in front of a nearly all White jury — still drawing outcries.

Across the country, people are watching what is happening here in Brunswick.

"You could either be known for a city that took a jury that was not represented and still do the right thing and you can be saluted for it, or you can be continuing what ugly history has happened in Georgia," Sharpton said.

"The Georgia legislature has a big part of trying to help and do their part," Ben Crump said. "But us as officers of the court — and when I say officers, that's the judge, the lawyers, the clerk, everybody — we have to study intensely peremptory challenges that are going to be allowed, as well as what questions are going to be allowed. Because you can almost predict how the jury is going to look based on what you're allowed to be requested of them."

While the jury hears testimony from the state, and later the defense, those beside the Arbery family are making sure their message is heard.

"Ben Crump — we've got to thank God because they put us together," Arbery's father, Marcus Arbery, said. "They come to fight with us to get equal justice for us so we can fight and get some justice for Ahmaud."

Ahmaud's mother, Wanda Cooper-Jones, told reporters: "In the beginning I didn't understand why God had placed this assignment on me. With that being said is that God will never fail you."