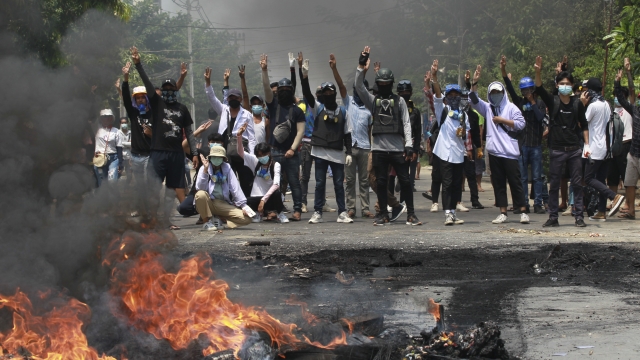 SMS
More Than 100 Killed In Myanmar As Military Cracks Down on Protests
By Alex Arger
By Alex Arger
March 27, 2021
Saturday's violence in Myanmar brings the toll to some 430 fatalities since the military coup in February.
SHOW TRANSCRIPT

More than 100 people, including children, were killed Saturday as Myanmar soldiers and police unleashed a violent response to continuing protests against military rule. The crackdown on Armed Forces Day marked the deadliest day since a February coup toppled Myanmar's democratically-elected government.

Anti-coup protesters fled or carried injured people to get help, while others hid behind flimsy barricades or faced off with authorities using bows and arrows.

Some 430 people have been killed since the military's February 1 coup, which ousted President Aung San Suu Kyi. In 2015, the Nobel Peace Prize winner became Myanmar's first elected leader in 25 years. Her party recently won again in a landslide election.

Coup leader General Min Aung Hlaing continued to justify the coup Saturday. He claimed in a televised speech that Suu Kyi's government failed to investigate the military's accusations of voter fraud in the November general election.

He also blasted demonstrations as terrorism and "harmful to state tranquility."

Numerous nation's condemned Saturday's violence. The EU's delegation said the day will be remembered as one of terror and dishonor. And the U.S. ambassador to Mynamar called for an immediate end to the violence and restoration of the democratically elected government.

Why Are So Many Migrant Kids Trekking Alone To The U.S. Border?